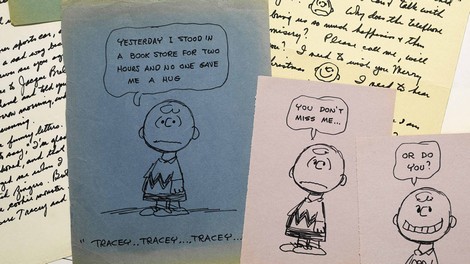 In today’s world, the idea behind romance has become a cliché in itself. It’s been overdone by soppy love songs, Hallmark cards, and that relentless option of getting engaged in Paris. Today, people don’t follow the same rules and regulations of traditional romance; instead, they tweet, Facebook, and Skype their partners to show their love. Gone are the days of nostalgic letters written in black ink, gone are the days of playing 80’s love songs in your car overlooking the bluff, and gone are the days when good-hearted romantic notions weren’t taken for granted. Declarations of love are so few and far between that we tend to forget that it still exists. Love isn’t love anymore; it’s a multimillion-dollar enterprise.

Therefore, stumbling upon a story of love in the nostalgic free-love era of the 70’s, immediately brightens everyone’s day. Charles Schulz, the artistic genius behind the Peanuts comic strip, didn’t send creepy cutouts of magazine covers to his love; instead, Charles sent drawings of Charlie Brown to a woman 23 years his junior. In March of 1970, Tracey Claudius, the woman in question, tagged along to an interview with Schulz after she conned her journalist friend into making her his faux-photographer. Then, much later, Claudius sent Schulz a letter in which she confessed that she only tagged along just to meet him and to “thank him in person for all the enjoyment Charlie Brown and that ‘stupid beagle’ provided” her.

Schulz responded to this letter by sending her a bunch of drawings he had done of Charlie Brown, Cartman, and Tommy Pickles. This cartoonish romance seemed to have been kept up by both parties, but in late 1970, Schulz sent Claudius two letters in which he said that his first wife at the time, Joyce Halverson, stopped him from making long-distance phone calls as she “had found the bills and became suspicious.” Then, according to Gawker, “[Schulz] wrote a comic strip in which Charlie Brown tells Snoopy he’s not allowed to ‘see that girl beagle’, then yells at him to ‘stop making those long-distance phone calls.’”

The short-lived romantic affair did not last, unfortunately, and both Claudius and Schulz went their separate ways. On the 12th of February, 2000, Schulz passed away at the age of 77, forever taking his short-lived romance to the grave. Fortunately, these letters have since become available for the public when Claudius and her daughter, Katie Leeman, handed the letters to mega-famous auctioneers, Sotheby’s. They are expected to sell for between $250 000 and $350 000.

In the words of Charlie Brown himself, “It’s stupid to just sit here and admire that little red haired girl from a distance. It’s stupid not to get up and go over and talk to her.”