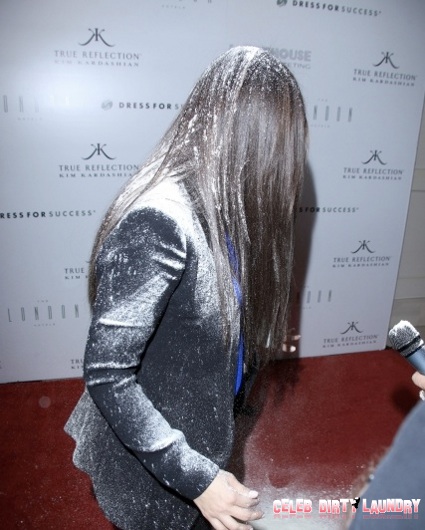 Somebody get Kim Kardashian a shield, because the reality TV star is under attack . . . again. So who’s raggin’ on her now? It’s *sigh* PETA. The organization says that KimK doesn’t have a heart and that she will do just about anything to stay in the news, including pressing charges against a poor girl — in particular, the girl who tossed flour on Kim this past Thursday.

One might go so far as to say that PETA themselves will do just about anything to stay in the news, as well.

In statement made to our pals over at TMZ, spokespeople for the animal rights group said:

“If she presses charges, at least people will be constantly reminded of her selfish, callous disregard for the cruel deaths that she causes by wearing fur. How much better it would be if she decided to evolve and enhance her image by donating her vulgar furs and exotic animal skins to the homeless. The activist acted from the heart, something Kim doesn’t seem to have . . . If anything, Kim should get a life, the very thing that she denies animals.“

Ouch, low blow PETA. Sure, Kim K could take the higher road and let this one slide, but do you really think it’s right to condone this kind of violent behavior — which, in my eyes, PETA seems to be doing?

PETA claims they had nothing to do with the flour-bombing. But, hmm. . .something smells fishy to me *glances sideways suspiciously*

Kim says she will press charges because she feels as if the woman should not get away with assault (understandable). Now, PETA is saying that they will extend their services, and even money, to help the flour-bomber with the potential lawsuit.

What do you think of this whole ordeal? We love people who take sides/play favorites in these kinds of verbal brawls. Who would you rally beside? Kim Kardashian or PETA/Flour-Bomber? Take our poll below! [remember how much I love polls?]