BY Dorothy Gale on May 23, 2012 | Comments: one comment
Related : American Idol, Reality TV 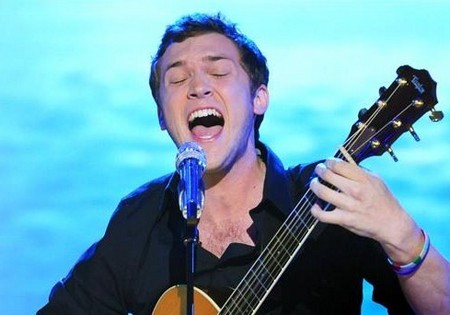 Phillip Phillips, from Leesburg, Georgia was the only contestant who has never been in the ‘bottom’ vote, and tonight he won America Idol having receiving the most amount of votes, he is now crowned the winner.  The 21-year old graduated from Albany Technical College, but missed his grad due to his Idol appearance.

All the way back to his audition, it was hard not to see that there was something special about Phillip, who else could perform Michael Jackson’s “Thriller” all by himself, with a guitar?

Phillip has been one of the top male vote getters from the beginning regardless of his been battling a kidney illness.

We all know that looks are not everything, but they certainly don’t hurt. Phillip was very quickly becoming a heartthrob, even Ryan Seacreast’s girlfriend, Julianne Hough, has a crush on him.

Like all the other contestants that were in the top 4, Phillip has an awesome voice but what he has more than that, is his ability to play the guitar, bass, piano, and drums. He takes on any genre of music and makes it his own and he has consistently choose songs that were a perfect fit for him.

Last week, Phillip sang “The Letter”, another great rendition in my opinion. Did you see the performance? If you missed it, you can watch the video HERE.

The judges weren’t overly thrilled with the performance, which I thought was a true test of the strength of Phillip’s fan base.  With his “I’ll march to my own drummer” attitude, I always felt that Phillip was untouchable.