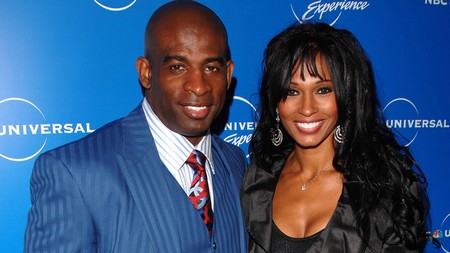 Pilar Sanders and Deion Sanders behave like animals and it is their kids who pay the price.  Extra! Extra! Read all About It!  Pilar Sanders has been arrested – Clink! Clink! – for attacking her soon to be ex-husband Deion Sanders, former NFL Defensive Back and Major League Baseball Outfielder.  Never thought this match would last, just a matter of time. Anyway Ms. Pilar got herself a whiff of the jealousy bug when she found out that Deion was seeing BabyFace’s ex-wife, Tracey Edmonds and decided to take it to the head.

Her and a girlfriend allegedly attacked Deion in his bedroom. The police were called and statements were taken. Deion stated that he only restrained his wife in order for her not to hurt him. My question is, why in front of the children? The police took a written report from them too so they must have seen something.

Look everyone gets it, you’re going through a terrible divorce, but if so, why are the two of you still occupying the same house. Living together while going through a divorce that is not amicable is like gasoline and a match.  Do you really think you can date without the other person getting upset about it – I say NO.

Both of their tempers are not calm. Really, Deion what were you thinking? Big sigh! – very stupid!  Now I’m hearing she cannot return to the family home for what, 48 days (don’t quote me on the days I may be off a little). But once she gets out of jail she cannot go straight to the family home. Pitiful!