Pippa Middleton Dances On Couches At Gun Pal’s Party, Is She Done Behaving? 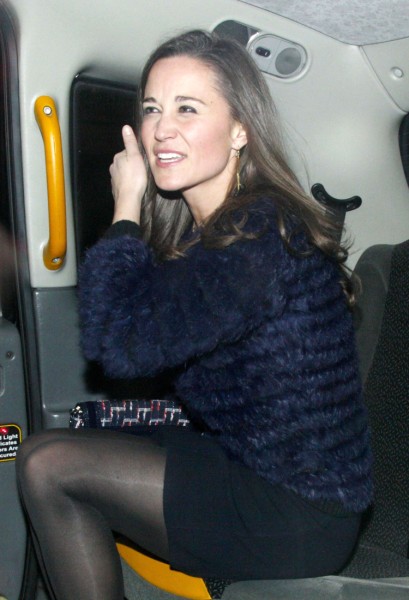 In my head Miley Cyrus’s I Can’t Be Tamed is blaring in the background. I don’t know if this is a sign that Pippa Middleton is tired of playing all sweet and innocent for the royal family or that she just can’t control herself around her French friends. Because Arthur de Soultrait is back in the picture and Pippa’s dancing on tables again – sadly with her top on this time! You remember Arthur, right? It was his 30th birthday party where Pippa was seen drinking champagne and dancing with dwarves a full day before a male friend pointed a gun at a chasing paparazzo. Oh, those were the days…. Well, needless to say, this guy brings the fun, and at his store opening in London, Pippa let loose yet again.

According to the Tatler: “Pippa Middleton likes dancing on sofas, and so when Arthur de Soultrait’s Vicomte A store launch party night went from polite to super fun, Pippa was the first to climb up on the upholstery and throw some moves. Charles Astor, Alex Marx, Victoria Aitken and Charlie Fellowes had also sauntered to the new flagship store on the King’s Road for celebratory bubbles and a late-night shop, along with Ed Taylor who chatted to Olivia Grant and Diego Bivero-Volpe, while Henry Conway and Orlando Hamilton compared rings. Then Arthur led a lucky few over to the Brompton Club for dinner and dancing (some peoples were so desperate for an invite, they even offered to buy a place) and after a yummy three-course feast, Pippa jumped up on the sofas to dance and everyone followed, only stopping when the clock struck 3am.”

Pippa Middleton led the couch dancing and people followed? I just can’ t see it. Pippa “The only thing interesting about me is my sister” Middleton was the life of the party? This is the Pippa I used to read about before Kate walked down the aisle. This is Pippa people referred to as a joint (everyone’s had a pass). This is the Pippa who danced shirtless. This is the Pippa who told her sister to forget about her assh-le royal boyfriend and wear short skirts and flirt with every dude in London to make him jealous (and it worked). Why can’t we hear more about this Pippa? True, couch dancing is so Paris Hilton circa 1997 but I’ll take it. Anything to convince me that, despite all those damned tweed sweater sets, the old girl still has life in her yet.

Is it a big deal if Pippa Middleton dances on couches with the same dude who got her in trouble before? What will Kate Middleton think?! Pippa’s had a rough few months. Can we let her put her hair down and catch a break?