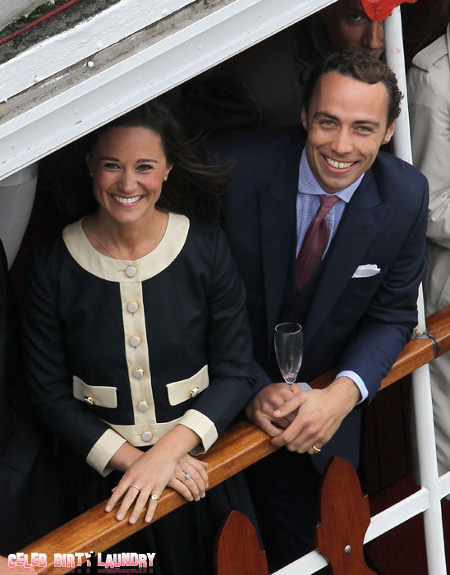 Pippa Middleton is trying very hard not to outshine her sister Kate Middleton at the biggest royal event — Queen Elizabeth‘s Diamond Jubilee celebration — since her sister’s marriage to Prince William. Dressed in a dark blue jacket with cream trimming, Pippa made a very conscious effort to stay out of her sister’s spotlight.

We all know Pippa received an insane level of attention after the wedding, sometimes even outshining her sister’s events. This beautiful brunette who recently quit her job from a catering company and started her own wedding planning business, is now quickly climbing the socialite charts. There’s no chance in royal hell that her business will fail, as she knows how the best of the best get married, with first hand experience.

Pippa joined the 1000-boat flotilla yesterday with her father on the Elizabethan, which is an exact replica of an 1890 steam roller. She was almost unnoticeable, waving at the press and fans at timely intervals. Pippa and her parents were invited by Queen Elizabeth herself to join in on the celebrations, viewed by many as a gesture made by the queen to accept the family into the royal monarchy.

Pippa’s appearance at the wedding between her sister and Prince William gave her a massive upshot in fame, with the entire world keeping their eyes on Pippa’s every move. The Diamond Jubilee is a perfect moment in time for Pippa to step out and wow the royal fans, but as gracious as she is, she never seems to upstage her famous sister.

I know what we all know, we would like to see some more of Pippa over the next few celebratory days. Her sister might be THE Kate Windsor, but Pippa surely is a future princess in every right, one who will one day grace the insides of magazines the world over.