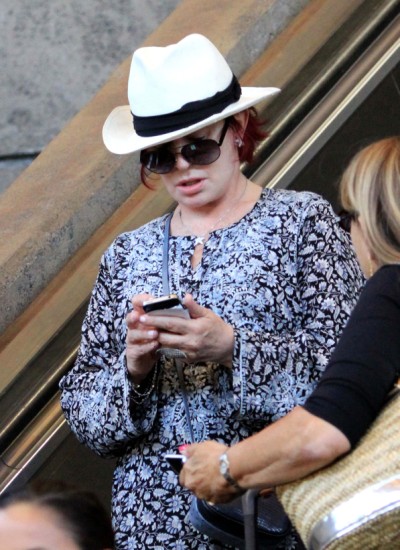 Sharon Osbourne was papped at LAX yesterday with weird, sweaty, patchy marks around her hairline leading some to believe the First Lady of Darkness had a botched hair transplant. Her signature, red hair dye looked like it was bleeding down her forehead. It didn’t look normal or comfortable, that’s for sure. She was practically dripping wet from sweat after the plane ride.

But pain is beauty, right? And Sharon’s had her share of both. But she’s usually not so coy about either. The American’s Got Talent judge is no stranger to plastic surgery but this could also be a case of Sharon hiding some nips and tucks she wasn’t so down with everyone seeing just yet. She’s admitted to getting just about everything under the sun done including a rhytidectomy for her wrinkles, an abdominoplasty for her flabby tummy, and a breast augmentation. She’s also been open about her battle with the bulge and lost over 100 pounds after undergoing a lap-band surgery in 1999. But she was happy with those results. She doesn’t looks so pleased in the Daily Mail’s pictures.

Sharon could also just be sporting a wig. She’s no stranger to going all Kim Zolciak. She wore one after she went through chemotherapy for her colon cancer in 2002.

The 60-year-old new grandmother may want to Turn Back Time a la Cher but sometimes it’s best to just let nature take its course. But I’m not there yet so I have a feeling I might say to hell with nature when I hit my 60s too! Do you think this is a case of plastic surgery gone bad or is Sharon just a little hot around the collar?