Pregnancy Shocker: Kim Kardashian Is Having A Baby (Photo) 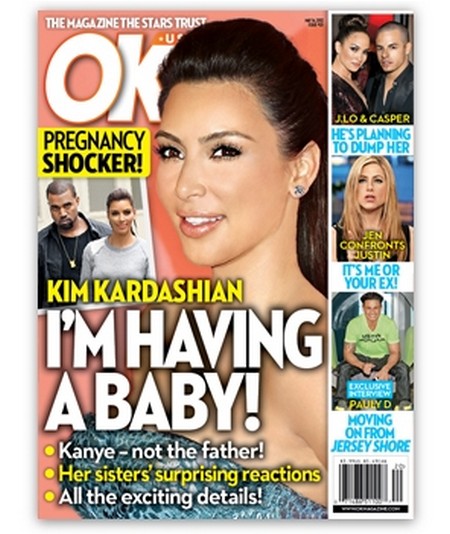 The current issue of OK! Magazine features the shocker ‘Kim Kardashian: I’m Having A Baby!’  The magazine claims they have all the details on a huge pregnancy shocker, Kim Kardashian is having a baby and it is not with Kanye West.  No wait!  This story gets better, Kim is not going to have one baby she is going to have two!  OK! has the scoop on her sister Khloe Kardashian and Kourtney Kardashian’s surprise and all the exciting details of the new baby.

OK! has more: Divorce drama nearly derailed Kim Kardashian‘s plans to become a mother — but lately, she’s been telling friends that it will still happen, possibly twice! Kim is moving ahead with plans to adopt a baby from overseas and is also thinking about becoming pregnant — this year!

The magazine goes on to claim that poor Kim was devastated after her divorce to Kris Humphries, but has recovered and is making plans to rebuild her life.  Which translates, Kim has gotten so much bad press she needs to find a way to get some good press.  What better way than a baby!  The magazine says that Kim is planning to adopt a baby ASAP and have one of her own.  I wonder what Kanye thinks about all this?  What do you think, will Kim make a good mother?  Hit the comments and let us know.

Also included in this week’s issue, Jennifer Aniston lays down the law with her boyfriend Justin Theroux and demands he makes a choice – either her or his ex.  They also have a wedding update, apparently Brad Pitt has convinced Angelina Jolie to eat more than a cracker a day.  She has vowed to put on weight for the big wedding.

To find out all these details and more, pick up the current issue of OK! Magazine.