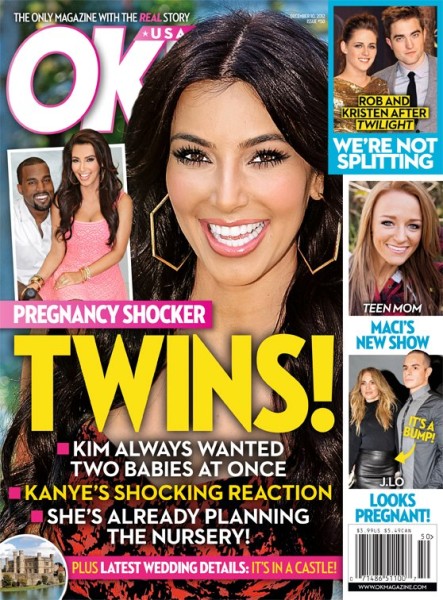 So this is why Kim Kardashian is threatening to sue Kris Humphries for delaying their divorce – she’s pregnant with twins!

Or maybe not. OK! magazine jumped the shark this week and reported Kim Kardashian is finally in the family way with Kanye West’s babies. At least that’s what you get from the cover. She’s planning the nursery! Kanye was shocked by the news! The only problem is the magazine is so lazy it doesn’t even bother to pretend she’s pregnant when it writes the accompanying story. Instead the whole headline is based on a dream Kim had where she had twins. She “has always wanted twins. Even when she was very little, she’d talk about how she was going to have twin girls one day,” a source told the magazine who added Kanye “thought she was kidding! But when he realized she was serious, he was over the moon! It was the confirmation he needed to know she was as committed to the relationship as he is.”

For crying out loud! I understand slow news weeks but come on! Commit to the fabrication. It’s the least you can do!

The magazine’s side stories aren’t much better. They out another pregnancy claiming Jennifer Lopez is finally knocked up by Casper Smart. At 43-years-old that should be a National Enquirer piece. Then there’s Robert Pattinson and Kristen Stewart stating they won’t break up after Twilight. They are a lot of pictures of them returning from London together so that’s an easy sell. I suppose this is the type of stuff you get when you decide to go it alone and be the only magazine without a Kate Middleton pregnant headline. I heard Kim Kardashian was the most searched celebrity this year. Ugh. This is the world we’re living in. A national tabloid can post stories about her dreams and they’ll still clean up.

You tell me. Is it a good decision? Do you care about Kim Kardashian’s twins?