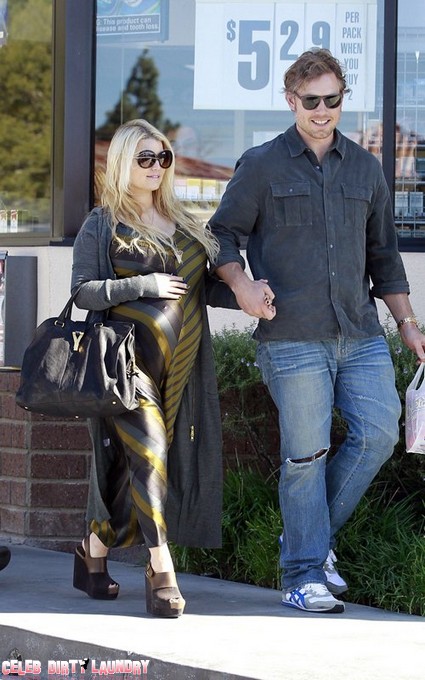 Jessica Simpson is getting very close to giving birth. The singer and actress was sporting a massive baby bump during a trip to Santa Barbara over the weekend. Fiance Eric Johnson was snapped taking care of his girlfriend and their precious cargo while visiting family. Awww.

Jess has been pretty low key lately. She isn’t giving much away either when it comes to motherhood. By the time the 31 year old announced her pregnancy late last year it was already very obvious she was expecting. Everyone already knew her big secret!  But she has mentioned her future son or daughter on Twitter. She recently tweeted about ordering a song by Jewel because ‘ I can’t wait for my lil one to enjoy her voice!’

We do know she’s getting sick of her baby body. That’s understandable after almost nine months. Another tweet saying ‘Looking forward to getting back into Daisy Duke shape. I forget what having a waistline feels like!’

Jessica isn’t the only celebrity getting ready to give birth. The 2012 baby blitz is almost upon us. Jennifer Garner is about to pop with baby number three with husband Ben Affleck. Hilary Duff is in the final stages of her first pregnancy. She’s married to Mike Comrie. Alyson Hannigan is not far off from welcoming her second child. And Mrs Bruce Willis – the gorgeous Emma Heming – is also due any day.