Pregnant Kate Middleton Gets A Gun To Protect Herself (Photo) 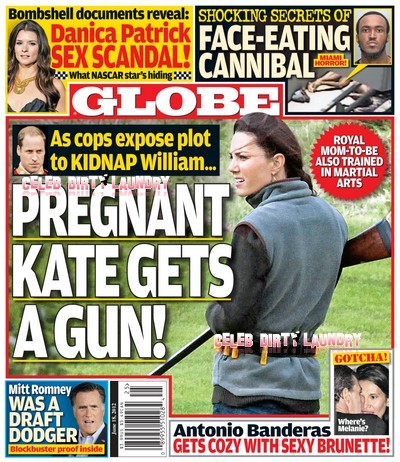 This week’s issue of GLOBE Magazine features the cover story ‘Pregnant Kate Gets A Gun.’  This news that Kate Middleton is pregnant and has been issued a gun will make headlines around the world.  All Royal watchers have been speculating for almost a year about when Prince William and the Duchess of Cambridge would announce that they are going to have a baby.  This child will be heir to the British Throne regardless of whether it is male or female.

The great news that Kate is now pregnant is tempered by fears for her safety.  With Queen Elizabeth’s diamond jubilee celebration and the Olympic games coming to London this summer it is not a complete surprise that GLOBE reveals that there is a plot afoot to kidnap Prince William.  Of course any threat to the future King of England also poses grave danger for Kate.  This explains why GLOBE also mentions on the cover that not only has Kate been issued a firearm for self defense but she is receiving special martial arts training as well.

We choose to focus on the positive side to GLOBE’S cover-Kate’s pregnancy.  Questions immediately arise as to how far along in her pregnancy Kate is and whether she is carry a boy or a girl.  We trust that the British Armed Forces are more than a match for any cowardly terrorists who would threaten our favorite Royal pair.  Let’s not forget that both Prince William and his stalwart brother Prince Harry are highly trained Royal Air Force helicopter search and rescue pilots.  As military men and backed up by a gun toting Kate we are assured of their safety.

We also feel compelled to mention that the last time a Middleton was anywhere near a gun things did not go so well.  Of course we are referring to Pippa Middleton‘s gun-crazed joy ride through the streets of Paris.  Another hot story featured on the cover of this week’s GLOBE exposes Antonio Banderas making time with a hot brunette.  GLOBE promises actual an actual photograph of bad man Banderas betraying Melanie Griffith.

We are impressed with GLOBE for discovering that Kate is pregnant and we can barely wait to read all the details in the print edition.  Once again GLOBE scoops their competitors and delivers the hottest news without mincing words.  But let us hope that the great news of Kate’s pregnancy is not be overshadowed by an evil plot.

To get your copy of GLOBE delivered to your door!  Go HERE!