Prepare for Battle of the Belts 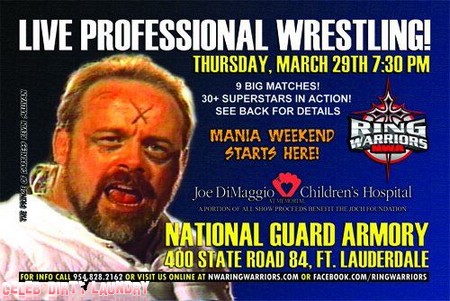 NWA Ring Warriors is bringing the pain on March 29th with Battle of the Belts at the National Guard Armory at 400 State Rd. 84, Fort Lauderdale, Fl. The colossal clash is sure to the highlight of WrestleMania weekend.

The legendary “Taskmaster” Kevin Sullivan will join “The Vampire Warrior” Gangrel in tag team action against former TNA Impact Wrestling star “The VIP” Cassidy Riley and Steve “Moose” Madison. The fearsome duo of Sullivan and Gangrel have tormented opponents all across the globe. Riley and Madison will have their hands full fending off these sadistic opponents.

TNA Impact Wrestling Television Champion Robbie E is set to square off with ECW Original Stevie Richards. Both of these stars have been featured in rings across the country and around the world. The crafty veteran Richards will have to pull out all the stops to beat Robbie E, who has been on the rise of late.

Plus I will be special guest announcer for the evening along with Dan Masters.

For more information about NWA Ring Warriors Battle of The Belts, HERE!