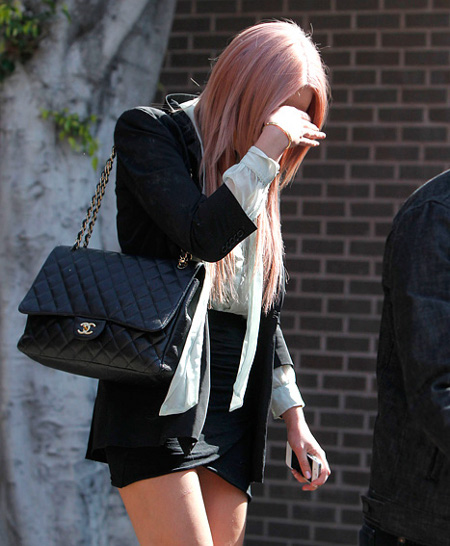 Amanda Bynes was officially charged with DUI yesterday, after her little “incident” in West Hollywood two months ago, and now she’s pleading with President Barack Obama to fire the arresting police officer — but he’s giving her the cold shoulder and has chosen not to respond to her comment. Probably because he’s busy running the world.

The actress (pfft, actress?!) was arrested on the 6th of April after allegedly sideswiping a police vehicle. Bynes did not stop, but drove off after the little incident. When Bynes was arrested, she refused to take a Breathalyzer or blood test and stupidly now faces an enhanced DUI charge, with a maximum penalty of up to six months in prison. Bynes’ mugshot was splattered across the internet, with pasty make-up and almost unrecognizable facial features.

After news of the charge broke, the “actress” decided that sitting back and awaiting a trial and verdict was not good enough. She tweeted, yes she did, Barack Obama. In this now infamous tweet, Bynes tweeted, “Hey @BarackObama . . . I don’t drink. Fire the cop who arrested me. I also don’t hit and run. The end.”

Bynes also took to Twitter last week and tweeted, “I can’t help but laugh at all of you writing fake stories about me. I was not in any hit and runs. I don’t drink so the DUI is false.” Yes, Amanda, try telling that to the presiding judge at your little trial, also, while you’re at it, tell it to the ladies you will share a cell with. They will most probably give you a little hit and run.

Since this article has been posted, Barack Obama has not responded. He is too busy dealing with international matters, with him being the President of the United States and all…