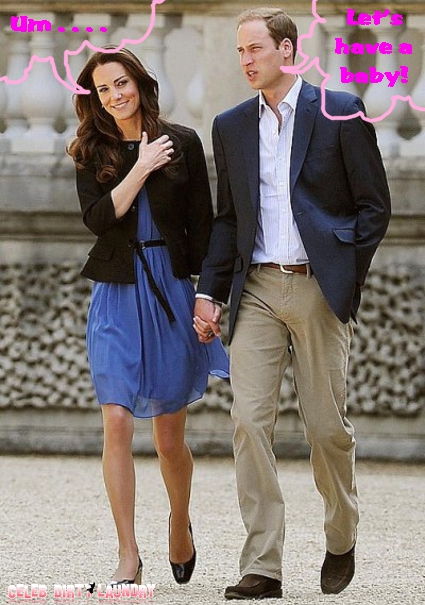 Prince William might be able to get anything and everything he wants in the world, but when it comes to the thing he desires most right now . . . well, that’s something only his wife Kate Middleton can give him: A BABY! Prince Will is supposedly loving his new job (yes, it is a job, people), but now he’s looking toward the future. And that future definitely involves a whole bunch of tiny, tiny, tiny lil’ British baby nuggets. It’s quite clear that he’d like a family. Sooner rather than later.

“I’d rather like to have children,” says the prince, who is only 29 years old. “So that’s the key thing really [. . .] I’m just very keen to have a family and both Catherine and I, you know, are looking forward to having a family in future.”

He tells OK! Magazine UK that marriage and being in a committed relationship is everything it’s cracked up to be and, despite the seemingly neverending rumors surrounding the couple, William says there are “no major arguments or domestics at the moment. It’s all going well.”

Prince William isn’t the only one who is ready to settle down and have some babies either. Prince Harry, who is sometimes viewed as the wild child of the bunch, also confirms that he’s eager to start a family in the near future as well.

“I’ve longed for kids since I was very very young,” he says. “And so I’m just, I’m waiting to find the right person, someone who’s willing to take on the job.”