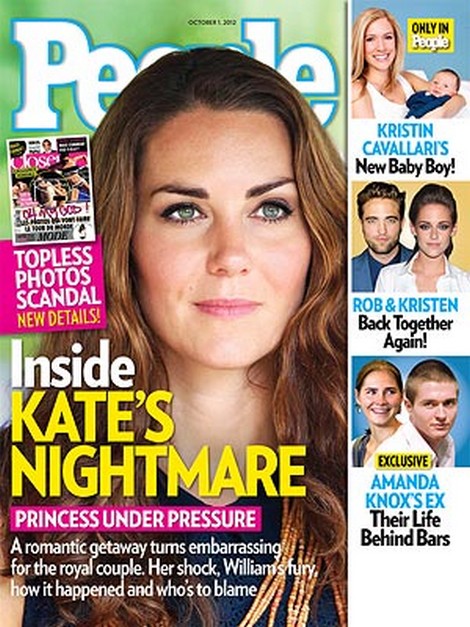 The current issue of People Magazine features the cover story “Princess Under Pressure – Inside Kate Middleton’s Nightmare.”  This week the magazine is covering the story that has caused the web to go ablaze, the Kate Middleton topless photos released by Closer Magazine in France.  The photos were snapped while Kate and William were on their latest vacation at a chateau owned by the Queen’s nephew in Provence. The royal couple relaxed there before embarking on their Pacific tour.

Prince William is said to be furious about the photos and the couple won an injunction in court to stop the French magazine from reprinting the images.  The problem is, the photos are already widely distributed on the internet and millions of people have seen them.  William cannot erase what people have seen and he is understandably very upset.

The release of the pictures did not do anything to jeopardize the couples good standing in the public eye.  As a matter of fact, most people see the release of the photos as a huge invasion of privacy and sympathize with Kate and William.  Prince Diana’s former bodyguard, Ken Wharfe, told People, “If this were Fergie, [the Queen] would be livid.  But this is top-drawer royalty: a favorite grandson and his beautiful wife. They live in another world.”

For more on this story and to find out how Kate Middleton found out about the photos, pick up the current issue of People Magazine on stands Friday!