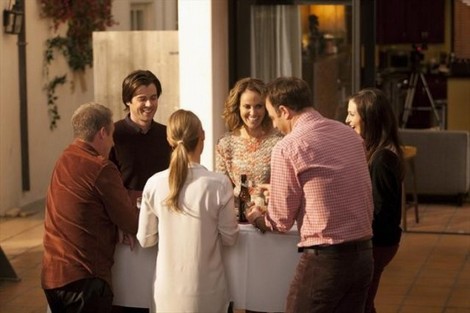 Tonight on ABC a whole new episode of  PRIVATE PRACTICE airs called “The Next Episode.”  If you have never watched the show before   Private Practice is the story of a team of gifted doctors working together on difficult cases, with patients whose medical needs often pose moral and ethical dilemmas. Together they work to change the lives of their patients for the better, as they look to one another for friendship and love.

The last year has brought great change to the lives of the Seaside Health and Wellness doctors. After struggling with infertility, Addison (Kate Walsh) was blessed to adopt a baby boy named Henry. In her love life, she made the decision to move on from Sam (Taye Diggs), who wasn’t ready for a family, and gave the practice’s newest addition, Jake (Benjamin Bratt), a shot. But just when she started to become comfortable with the new man in her life, Sam stunned her with a proposal. Now Addison has a big decision to make… whom will she choose?

On tonight’s show a reality show centered around Sam sheds some light on issues in his colleagues’ personal lives. Meanwhile, Sam’s mother (Alfre Woodard) seeks his help after her boss (Richard Roundtree) falls ill; and the search continues for a girl who went missing from St. Ambrose.

[EDITOR’S NOTE: ABC HAS DECIDED TO CANCEL THE SCHEDULE PRIVATE PRACTICE EPISODE TONIGHT AND INSTEAD THERE IS A 20/20 SPECIAL ABOUT HURRICANE SANDY