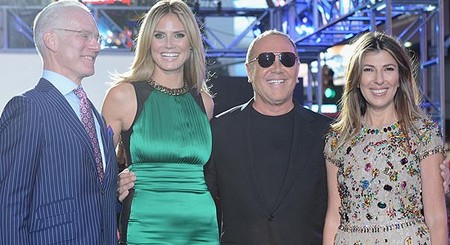 Tonight on Lifetime is the season 10 premiere of Heidi Klum‘s ‘Project Runaway.’ We are already in season 10 can you believe? The show kicks off tonight with a fashion show in the middle of Time Square in New York City.  Actress Lauren Graham and stylist Patricia Field are the guest judges tonight.

The prizes for Season 10 of ‘Project Runway’ are this season’s victorious designer will receive $100,000 from L’Oréal Paris to start his/her own line, a fashion spread in Marie Claire magazine, a 2013 Lexus GS 350, a $50,000 technology suite by HP and Intel to create his/her own vision and run his/her business and the opportunity to design and sell an exclusive collection at Lord & Taylor. Lord & Taylor is the exclusive retail sponsor for “Project Runway’s” 10th season and has merchandised the accessory wall with its well-edited assortment of product.

The retailer will also host an exciting challenge episode that will come to life for consumers on Fashion’s Night Out in the store’s Fifth Avenue flagship. The model paired with the winner of “Project Runway” will also appear in the designer’s editorial feature in Marie Claire and receive $25,000 from L’Oréal Paris EverStyle.

There will be a surprising twist this season on the show according to Heidi Klum.  Heidi told Good Morning America:  “The pressure got to them they could not make it work and literally in the middle of the night they packed their things very quietly and just walked out.”

Tonight’s episode is going to be an exciting one that you won’t want to miss, so be sure to tune in for our live coverage Lifetime’s Project Runaway tonight at 9 PM EST!  While you wait for our recap hit the comments and let us know how excited for you for the season 10 premiere of Project Runway!

And the RECAP is live and underway!

Season ten of Project Runway begins with a celebratory champagne toast in Times Square.   This season’s designers form a definite melting pot.  Red haired Buffi hails from Dubai and has a crush on Tim Gunn. Gunnar is back for the second time.  He is looking to redeem himself with clarity, focus and a point of view that he was missing last year.   Lantie just opened her own design studio in NYC.  Elena designs for the edgy, risk-taking girl, while Melissa was almost an attorney until her love of black took over and guided her in another direction.

The designers came in with a design to present and their first challenge is to create a companion piece to go with it.  They have one day and $100 bucks before they have to present their creations in Times Square.

As the designers start working, Sonjia is struggling to stay focused and Christopher’s sewing machine won’t work properly.  Tim Gunn starts walking around critiquing and he demolishes the skirt that Fabio is working on.  He is horrified and fears that this could pave the way for him to be the first sent home.

There is a lot of panic amongst the designers as they scramble down to the wire.  The usual problems arise, not enough time to hem, close seams, etc.  Beatrice trimmed a hole right into her dress and fears her model will end up naked.  The designers have two hours to get there models dressed, accessorized on the Lord and Taylor Accessory Wall, then through hair and make up.  When the dealine is up it’s show time in Times Square.

As expected, some of the designs were really well received and others were snickered at.  6 designers were called on the carpet to explain what they were thinking.  Koonan’s club kid Tokyo style was intriguing but it’s too early to know if he is sincere in his style or just looking to shock.

Melissa loves all black and everything with her is about angles.  The judges all loved her and her vision.  Unfortunately, Beatrice wasn’t so well received.  She is obsessed with knits and her ugly pieces were ripped apart.  In the end the main problem was that the judges felt like they don’t know who she is as a designer.

Christopher is going for chic, sophistication and seems to have nailed it.  the movement on his first piece was amazing.  Lante was aiming for a vintage 60’s look and the judges weren’t feeling it at all. They didn’t like her pieces or even the textiles.  Last came Len with his clever draping and contrasting colors.  His designs were a hit.

Christopher was picked as the winner of the first challenge and he definitely deserved it.  Beatrice was the first to be eliminated.  She and her ugly knits were sent home ASAP.  Tune in next week to get better acquainted with the new batch of designers and see who will be sent home sooner than they’d like!