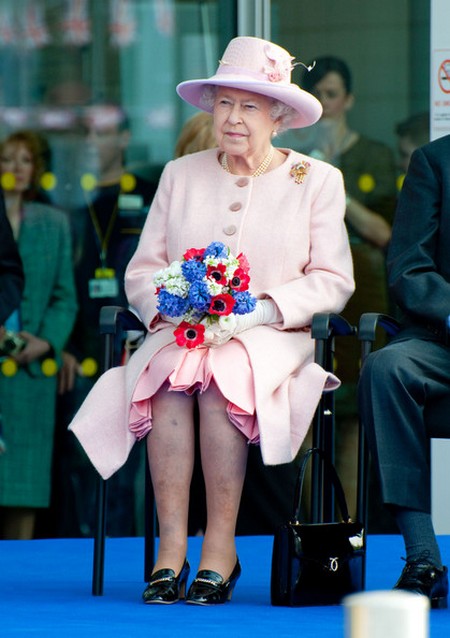 Queen Elizabeth popped into the ceremony of a stunned newlywed couple.  Of course we are not referring to Kate Middleton and Prince William here, but a couple who did not expect to see the monarch join their wedding party!  John and Frances Canning were shocked when they saw the 85-year-old monarch and her husband Prince Philip walking into the room moments after they had tied the knot at Manchester Town Hall.

The royal couple had been attending a lunch with 200 local volunteers in an adjacent room, and the queen had asked if she could pop in to congratulate the bride and groom.  They then spent about five minutes talking to the newlyweds and even agreed to pose for photographs.

Frances said:  “It was bizarre that she knew our names. She said: ‘Hello John, Hello Frances.'”  Groom John added:  “She commented on how beautiful Frances looked in her dress and wished us all the best for the future.”

John chatted with Philip while Frances posed with the queen for a few photos and he was very impressed with the Duke of Edinburgh.

John said:  “He was lovely man. He even asked where in Italy we were going on our honeymoon.”

The couple had booked the town hall for their civil wedding last year and were told they would be sharing the venue with a VIP.  When they discovered who it was John, jokingly wrote to Buckingham Palace to invite  them to the celebration, but had received a reply politely declining the offer.

However, they decided to make their dream come true and got in contact with Manchester City Council to arrange the surprise.

Frances told the Manchester Evening News:  “We never dreamt we would be able to meet her. When we had our ceremony, the staff asked us to wait for a moment in the corridor and just a few minutes later the Queen arrived. She knew both our names and apparently we had been especially added to her rota.”

What a fortunate couple.  Their marriage is certainly getting off to a great start!