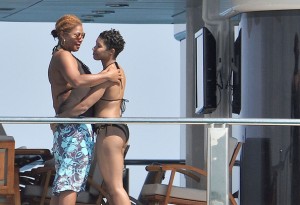 I bet Queen Latifah’s girlfriend Jeanette Jenkins must be a very happy woman. Ok so I am not 100% certain that Jeanette is her partner but the question of whether Queen Latifah is gay or isn’t she gay can finally be diminished…at least that is what I get out of her Latifah’s Long Beach Pride event presence. The rapper surely added more fuel to the fire as she performed and spoke at the event.

I don’t think Queen Latifah being a lesbian was a big secret but it seems to me as if Latifah officially came out. According to BET, in front of a crowd of 1,000 people, the rapper told those in attendance, “Y’all my peeps (people). I love you!” So does this mean that the LGBT is a community she claims? I sure take that as a out and proud moment, my friends!

She also warned the crowd to keep safe from getting STD’s. She went on to add, “Y’all be safe whatever y’all get into tonight. Boys –- strap it up. Ladies –- strap it up.” Word!

So who is this Jeanette Jenkins girl and is she Queen Latifah’s lesbian lover? Well, there has not been any confirmation but apparently this woman has been in Queen Latifah’s life for YEARS. Jeanette and Queen have been photographed on numerous vacations along with Eboni Nichols. They surely could be just good friends.

In a recent interview with Sister 2 Sister magazine, Latifah said, “I just like ladies who have class. Period. And if it’s “T and A” you’re sellin’, that’s fine, as long as that’s what you’re selling. But you don’t have to show everything, you know? You can hold some back and just be yourself and let your personality shine and let your individuality show. To me, that’s sexier. A confident woman is a sexy woman, in my opinion.” I agree! Class over trash!