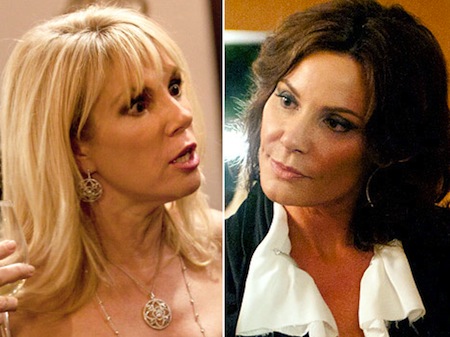 In the past two episodes of Real Housewives of New York, LuAnn de Lesseps has claimed that she was threatened by fellow cast member Ramona Singer. To give the back story, on the season premiere, LuAnn walked up to Ramona to express her anger over what Ramona had said about her children during the Season 4 Reunion. Ramona responded by blowing LuAnn off, but agreed to talk about the issue later.

That weekend, LuAnn’s teenage son, Noel, had a birthday party in their Hamptons home, where one of his guests got alcohol poisoning and LuAnn had to call 911. Ramona, who was also in The Hamptons that weekend, heard about this and according to LuAnn, Ramona called her up and threatened to tell everyone about her son’s birthday party and more if LuAnn did not drop the issue of what was said during last season’s reunion.

During the second episode, Ramona and LuAnn meet in Central Park to discuss their issues, and LuAnn confronts Ramona. Ramona denies threatening LuAnn and says she is “exaggerating” but was vague about exactly what she said to make LuAnn  perceive it that way.

That being said, it was unclear exactly what transpired during that phone call until fellow cast member Sonja Morgan weighed in on the incident via her blog on Tuesday. “When Ramona feels her words are challenged she feels she has to defend her integrity with the facts,” writes Sonja. “Ramona had told Lu, ‘If you keep bringing it up I will have to bring out the particulars regarding your parenting, so don’t push me. Drop it.’ Does this constitute a threat?”

Sounds like a threat to me!  What do you think, readers?  Hit the comments and let us know!