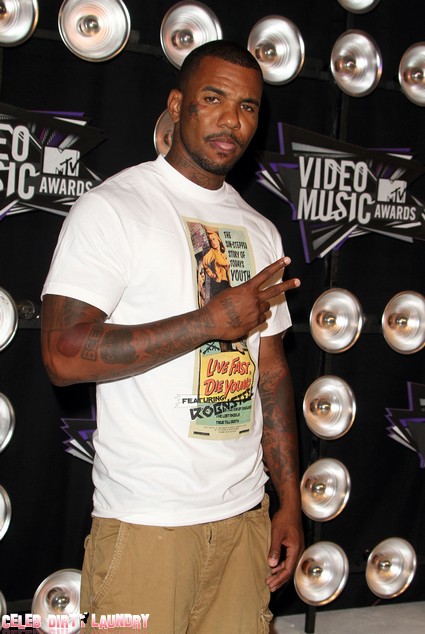 The Game, now known as Game decided to behave like the disgusting pig that he is and was filmed spitting on a group of female fans in an Australian nightclub.  In the video below you will see the asshole and his posse trying to look tough strutting around a Gold Coast nightclub – Gold Coast is a popular resort city south of Brisbane – then The Game approaches some girls leans forward over a banister and spits on them.

The spit can be seen flying through the air in the video.  When the camera pans over to the crowd, a girl who has apparently been spat on yells “how dare you” and storms out of the nightclub along with her friends.

It is so typical for American rappers to attempt to degrade women.  Why women stand for this and still flock to these goons is the real mystery.  Tupac exemplified this stereotype of rappers as criminal woman-hating thugs with his rape and shooting convictions and the evidence on his recently released sex tapes.

The Game, real name Jayceon Terrell Taylor, grew up in the LA gang neighborhood of Compton, and in 2001 he was shot five times and left for dead.  He was in a coma for three days but recovered and in 2005 launched onto the US hip hop scene with his debut album The Documentary, which earned two Grammy Award nominations.

In 2008 he was sentenced to 60 days in jail, 150 hours of community service and three years of probation after pleading no contest to a felony weapons charge.  Canadian immigration officials denied him entry to the country for a tour last year due to his alleged ties to the Bloods street gang in Los Angeles.

The NineMSN Australian news program broke the story:  US rapper The Game has been filmed leaning over a railing and spitting at a group of fans during a show on the Gold Coast. In the footage, the 32-year-old rapper can be seen sitting in the corner of the stage at the Bourbon Bar nightclub and looking bored while a group of girls try to get his attention.

He gets up and approaches the girls, before lurching forward and spitting towards them.  The spit can be seen flying through the air in the video. When the camera pans over to the crowd, a girl who has apparently been spat on yells “how dare you” and storms out of the nightclub along with her friends.

Brydie McCreadie, 19, who filmed the video at the club on February 16 and sent it to ninemsn, said she was “disgusted” by the rapper’s behaviour.  “I was like, ‘whoa’. At first I wasn’t sure if he was spitting at me,” she said.

Ms McCreadie, from Southport, said she did not hear the girl next to her say anything to provoke The Game into spitting.  “He was sitting there drinking. We were all a bit drunk. I think they were just excited to see him,” she said.  After the spit The Game is seen taking off his gold chain and passing it to members of his crew on stage.

“I think he was about to start a fight or look tough,” Ms McCreadie said.  Ben Kirkham, the marketing manager for Bourbon Bar, said he had only received good reviews about the night and was “shocked” to hear about the incident.

“I hope that doesn’t reflect on the club because that’s not what we’re about,” he said.

Mr Kirkham said The Game had arrived that day on a flight from Los Angeles and had quickly done a show in Brisbane before being driven down to the Gold Coast the same night.  “That was close to 1.30 in the morning,” Mr Kirkham said.

“They were sitting in the corner eating. They wanted chicken so I went and got them food to unwind before getting into party mode. They sat there for about 20-30 minutes and after that they were drinking, partying and having fun.”

“We had a great time. They wanted to stay on but their tour manager said they had to go because they had to travel by car down to the Sydney show.”

We certainly hope that Australian officials ban The Game from entering that country again.  I’d really like to see The Game and his retinue of morons try their bullying on some MMA fighters or maybe a few marines… but of course that won’t happen.  The cowards play it safe – spitting on women.

What do you think of this typical misogynistic behavior on the part of rappers?  Let us know in the comments below.