BY Cate Meighan on May 24, 2012 | Comments: Leave Comments
Related : Real Housewives of Atlanta 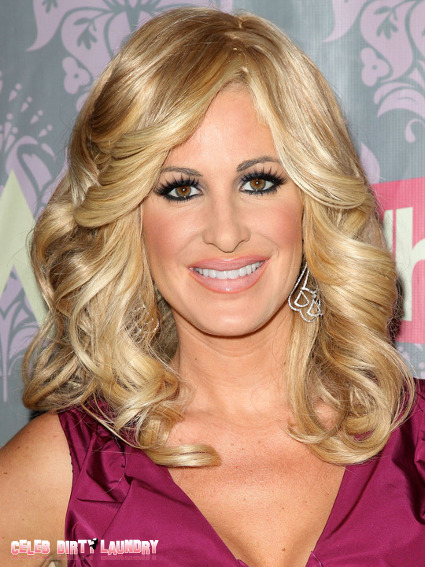 Even Real Housewives have bad days.  Yesterday morning firefighters responded to an emergency in Kim Zolciak’s spacious Atlanta compound.  The fire seems to have started with an ATV in one of the homes’ garages. Despite heavy smoke and flames, everyone inside was just fine and there was little damage to the 3.2 million dollar mansion. And, thankfully, all of her wigs survived . . . phew!  Kim took to her Twitter last night and tweeted,

“Shout out to Roswell Fire Dept for their quick response this morning! God is always on my side! #grateful.”

These days Kim has a lot to be grateful for.  Bravo viewers are tuning in by the millions to watch her latest reality show, Don’t Be Tardy for the Wedding.  The new series tracks Kim and boyfriend, Kroy Biermann of the Atlanta Falcons, as they plan their nuptials (which actually took place last November).  The couple is parents to Kroy Jr., 11 months old, and Zolciak has two daughters — Brielle, 15, and Ariana, 9 — from previous relationships. They recently announced that another son will be joining their happy, growing family later this fall.  Not sure who was more surprised by that bit of news, Zolciak or her legion of fans.

Are you a fan of Real Housewives of Atlanta?  What do you think of Kim and Kroy together?  She seems happier than ever with him.  Do you think they are the real deal or will Kim’s expensive wigs last longer than this marriage?  Tell us what you think in the comments below!