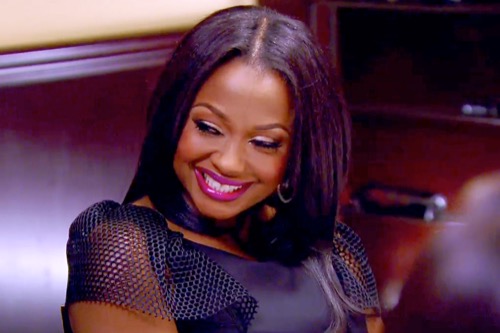 Real Housewives of Atlanta’s Phaedra Parks may seem all professional and mature from the outside looking in, but apparently, there is more to her than meets the eye. And from what I can see, girlfriend has a badonka-donk like what! The RHOA star is not only working as an entertainment lawyer but she is also working on an exercise DVD that will be focusing on increasing the size and the roundness of your behind. Seriously who doesn’t want a big enough booty to where you can use it as a shelf to set your drink on. Hello! I’m raising my hand!

Let’s just say that Phaedra has been working extra hard on that behind and she does not show when it comes to showing it off. There’s nothing like confidence, persistence and pay off and girlfriend definitely has those going for her.

In a photo posted by Kandi Burruss via Twitter, we get to see how hard Phaedra has really been working in the gym! MediaTakeOut posted the photo and got many people up in a tizzy over its conservative nature. Where’s the skin, yo? But, seriously.