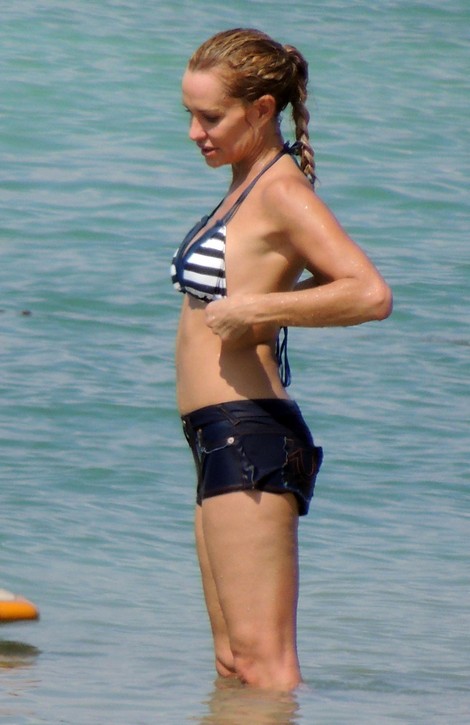 If you don’t already watch Bravo’s The Real Housewives of Beverly Hills religiously, now is the time to do so! The ladies are more vicious than ever, but they’ve learned to do it with a little more class and grace—it’s positively addicting! On the season two reunion specials we watched newcomer Brandi Glanville criticize Taylor Armstrong’s decision to write a memoir about her struggle in an abusive marriage. Her then-husband Russell Armstrong was emotionally and physically abusive, attempting to drown her, breaking her jaw, and hitting her frequently. After his tragic suicide last summer, Taylor began writing a memoir hoping to provide help and support to other victims of domestic violence.

Brandi accused Taylor of selling out, sympathizing with Russell, who couldn’t defend himself against her allegations, and asking why she was writing a book instead of mourning. Taylor yelled back, citing a statistic that says three women die daily in America from domestic violence, and that her silence costs lives. Well, in a hypocritical twist, Brandi has taken the pen in hand and is writing a tell-all memoir about her divorce. Brandi has two children with Eddie Cibrian, who cheated on her with Leann Rimes before their divorce. Eddie and Leann are now married, and Brandi has obviously picked up on it as her ticket to fame.

Last week on RHOBH, Taylor asked, “Brandi’s husband cheated on her with Leann Rimes, left Brandi and married Leann Rimes. Is that a whole book?”  We love Taylor for calling it out. A book about violence that could inspire women to leave a dangerous relationship and get help is a worthy book. A tell all about your ex is not. Taylor continued, “Interesting you went out and got a book deal about your ex husband leaving you I think that is fascinating!”

So how did the other housewives split up this time? Kyle Richards defended Taylor, chiming in, “No offense Brandi, but you were the first one to attack her, for doing a book. Don’t expect her to be happy for you if you weren’t happy for her.” Her recovering alcoholic sister Kim Richards used the fight as an opportunity to cite her own use of meditation as a way to forgive. The claws are out, and I’m predicting that this feud between Taylor and Brandi will help drive the rest of the season. Are you a loyal viewer, and if so, is Brandi being a huge opportunist and fame whore, or is she driven by telling an important story?