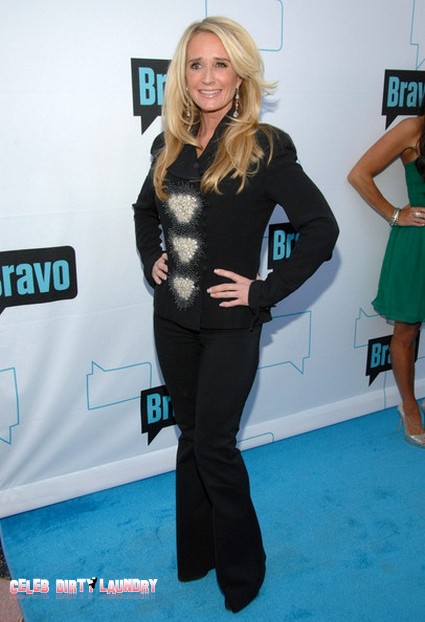 Guess she won’t be mixing her prescriptions anymore! Kooky Real Housewives of Beverly Hills Star Kim Richards has checked out of rehab according to her sister, and Real Housewives Co-Star, Kyle Richards. Radio personality Ryan Seacrest reported this morning, “Kyle told me exclusively off the air Kim is actually out of rehab! … She assured us, despite reports to the contrary, Kim is not drinking or partying at all, and is on the road to recovery.”

The 47-year-old former child star checked into rehab in December of 2011 to address “Alcohol abuse and other problems” and has been doing well. Her sister Kyle told E! last week that she was doing “fantastic” in the program.

Kim—most well known for her acting roles in “Little House on the Prairie” and “Escape to Witch Mountain”— has been making waves all season on the Bravo hit show with her bizarre and erratic behavior. So far the other wives, Brandi Glanville excluded, seem keen on explaining it away as a bad reaction to her accidentally combining prescription meds. Right…

Actually, news of Kim’s discharge comes the day after an explosive episode of the show that featured more of Kim’s ridiculousness during a trip to Hawaii. In the episode Kim, and very creepy boyfriend Ken Blumenfeld, show up more than a day late for Mauricio’s (Kyle Richards’ husband) birthday celebrations and offer contradicting excuses for their general douchy behavior.  If you didn’t watch it—do!

The season two finale of Real Housewives of Beverly Hills is set to air on January 23rd and according to Bravo Executive and on-air personality Andy Cohen, “It was emotional, it was deep, it was intense. It was sometimes funny, it was surprising, there were some alliances that had shifted, but no topic was off the table.” Unfortunately, Kim was not able to take part in the drama as the finale show was taped last week while she was still in the program. I can’t wait to see how they address her absence. Methinks Brandi, as annoying as she is, deserves a wee apology from Kyle— and knowing Brandi, she will probably say ‘I f***ing told you so’! Let the fireworks begin! YES!!!