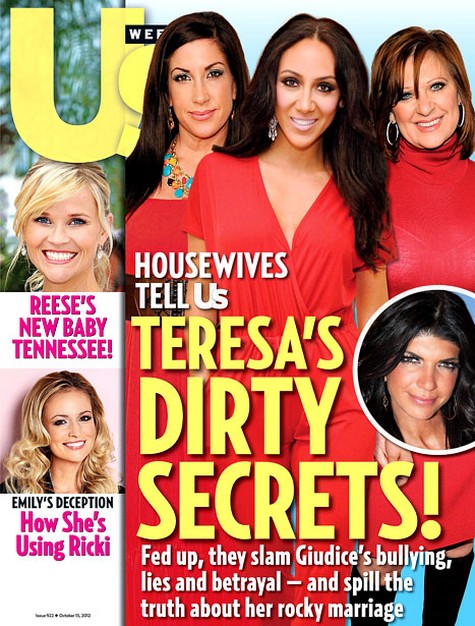 The verbal stoning of Teresa Giudice continues on Sunday in part two of the reunion of The Real Housewive’s of New Jersey filmed a year ago in Atlantic City. Last week’s show was brutal and according to the latest issue of Us Weekly, it’s only going to get a whole lot worse.  Teresa, after being ambushed by everyone begins fighting back and swinging accusations of her own. She claims that Jacqueline Laurita’s husband Chris has cheated on her and it infuriates Jacqueline to the point that she dishes new information on the Giudice family spats,

“If we’re being honest, he calls her those names and she calls him names and they punch each other.  You guys get into some pretty bad [fights]. I’ve heard every name in the book from you two. You told me your husband cheated on you several times: You caught him with the secretary, the babysitter. You asked me what you should do, because my ex-husband cheated on me.”

Abuse allegations are a pretty heavy duty thing to make but quite honestly, would it really surprise anyone if these two beat the crap out of each other, probably in front of their kids? Not me, that’s for sure. I’ve long said that the main reason that Teresa stays with a douchebag like Joe and defends him to the ends of the earth is straight up fear. She’s afraid of his violent outbursts that happen when Bravo’s cameras’ pack up and leave. I also suspect that shortly after his ass is locked up on that fraud charge she will be filing for divorce. I’d put money on it. She doesn’t need him and can only begin to build a better life for her kids by first leaving him.

Do you believe Jacqueline’s allegations about the Giudice’s abusive fights? Tell us your suspicions in the comments below!