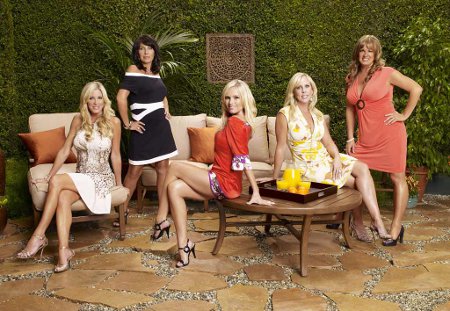 It’s so weird how things have changed on the Real Housewives of Orange County: just a few seasons ago Tamra Barney and Simon were married; Vicki Gunvalson was with Don; and Vicki was telling Tamra that she needed to leave Simon because she couldn’t handle seeing her BFF not Happy. She also said she had noticed the way Tamra had changed since things with Simon had gone so bad. Back then, you couldn’t separate the two — they were joined at the hip.

Vicki was so happy when Tamra left and divorced Simon. I found it so weird how, even before that split, Vicki acted like Tamra’s husband. It was almost as if she was saying, “You choose your husband or you choose me” — in some sort of fatal attraction way.

Things have changed this season — the two barley speak.

Vicki, who’s now dating Brooks Ayers, is crying like a big baby over Tamra judging her new man. Brooks has Been frowned upon for being a dead beat dad and has even been arrested for it! Vicki thinks Tamra is to Blame for all the gossip about Brooks. Guess if he’d paid his child support all of this wouldn’t be happening!

Tamra maintains her innocence by saying that she didn’t start any rumors — she also says that you can find out everything you need to know about Brooks online, including the fact that he was arrested two times in 2010 for not paying child support. She also points out that Vicki went after fellow cast mate Gretchen Rossi’s boyfriend for the exact same thing so why is Brooks any different.

I’m sure the reason it’s different is because it’s Vicki’s boyfriend this time around and she doesn’t like it. Well, Vicki, you have no problem speaking your mind to anyone else so why don’t you tell Brooks to man up and quit being a dead-beat dad and take care of his kids!

This whole thing really upset Tamra. Looks like there friendship may be over for good. I can’t blame Tamra for being upset, after all, she did question Brooks motives on the show . . . she was only looking out for her friend.