BY Lindsey Dow on May 23, 2012 | Comments: 3 comments
Related : Real Housewives of Orange County 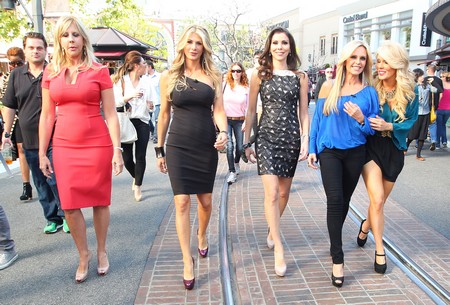 If you’ve been watching this season of Real Housewives of Orange County you’ve no doubt noticed the Alexis Bellino and Tamra Barney conflict and the tenion between the co-stars, which came to head in last night’s episode, when the two met for drinks to discuss their relationship.

Alexis invited her there in hopes of resolving their differences, but the feeling was not mutual. Tamra told Alexis, in so many words, that she was not interested in any sort of friendship with her. Alexis asked her why she kept talking behind her back, which Tamra denied doing and insisted the only time she spoke of her was when people asked. Alexis said she’d rather Tamra just be real to her face, which prompted Tamra to call her shallow, fake and a liar.

The meeting ended with Alexis storming out of the restaurant.

Tamra took to Twitter to comment on tonight’s episode. “You have no idea who the real Alexis is,” she tweeted. “No one on the cast can stand her.“

Yet she insists she talks about Alexis “only when I’m sitting in an interview chair and asked. I get paid for my mouth.”

Some fans suspect jealousy is the real reason behind Tamra’s dislike for Alexis, but Tamra scoffs at that notion.  “haha. Ya I want to be as dumb as a rock and rent everything in my life. Let’s not forget the gross mean husband,” she tweeted sarcastically.

So why does she dislike Alexis so much? “I don’t like fake people that look down on others,” she tweeted.

Alexis has yet to directly respond to anything Tamra has said tonight. “Life is too short to stress over people who don’t deserve to be an issue,” she tweeted.