BY Scuttlebooty on May 12, 2012 | Comments: Leave Comments
Related : Reese Witherspoon 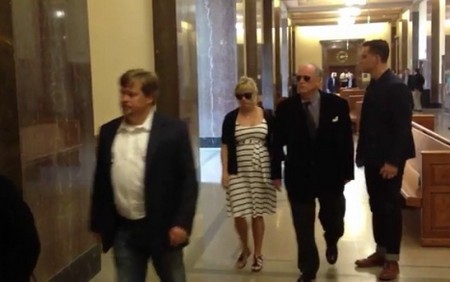 Drama has taken a real turn for megastar, Reese Witherspoon, who appeared in a Nashville courtroom yesterday for an emergency closed door hearing regarding bigamist charges filed against her father, John Witherspoon.

In a head scratching turn of events, Reese’s mother, Mary Elizabeth “Betty” Witherspoon, has filed a lawsuit against her husband and is accusing him of bigamy. Betty has also taken out a restraining order against the woman he married in January, Tricianne Taylor, for misusing the family name.

According to TMZ, Betty says John cannot be married to Tricianne because he is still married to her. In the affidavit she says her husband has no recollection of the marriage and she fears for his safety. She believes he is suffering from early on-set dementia.  Betty and John have been separated since 1996.

‘When I confronted my husband, he said he didn’t know who Tricianne Taylor was and that he did not remember getting married,” Betty said in the affidavit. She also insisted she did not want a divorce and was still in love with her husband and would like his faux marriage with Tricianne to be annulled

After seeing the bogus wedding announcement in the paper last month, Betty said she tried to contact Tricianne, but she refused to speak with her and did not respond to a letter that said John was already married with two children and four grandchildren. “But she clearly knows now that she is married to a man who is not divorced,” the affidavit said.

Betty says the couple was seen together last March when John tried to bring Tricianne to Reese’s wedding to husband, Jim Toth. According to the affidavit, Tricianne was denied access because she was not on the guest list. Tricianne is currently living with John in Nashville in a condo owned by Reese and has gotten John to change his will.

People magazine reports John, a physician, has gone through a host of personal problems of late including alcohol abuse, hoarding, compulsive spending and has recently lost his medical practice.

“I also fear for my husband’s personal safety and the safety of my family,” Betty said.

What do you think?  Is Betty trying to steal back her husband and his estate through the courts?  Or has John lost it and is he being exploited by Tricianne?  What can poor Reese think about all this?  Let us know in the comments below.

To see the video go HERE