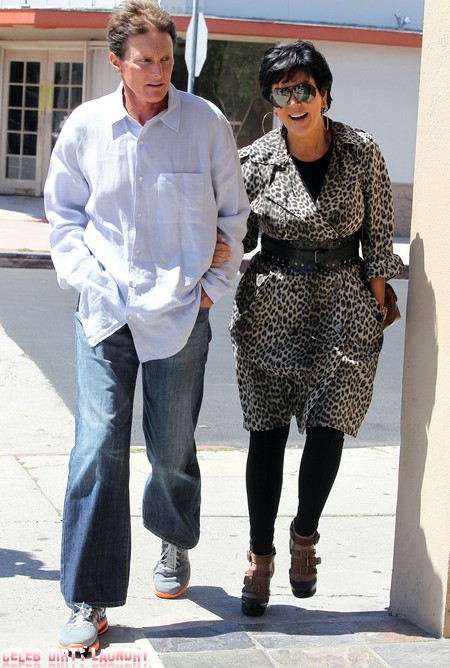 Bruce Jenner has had enough of Kim Kardashian’s momanager and his wife, Kris Jenner, and has left her.  Bruce doesn’t want his two young daughters, Kendall, 16, and Kylie, 14,  turning out like their Kardashian half-sisters, Kim, Khloe, and Kourtney – who he labelled as ‘hypersexualized reality starlets.’

Bruce attempted to put his foot down – demanding that Kris control her ‘cold, bloodless ambition’ before she destroys the girls.  Kris naturally refused to listen to Bruce and told him ‘I’m the boss here.’  That was when Bruce lost it and according to sources was on the verge of tears when he stormed out.

The motivation for Bruce’s angry exit came from well-grounded concerns that Kris is transforming their 2 youngest daughters into ‘Kardashian Robots.’  Bruce simply packed a bag and walked out on Kris after a huge fight over last week’s creepy display of a photo shoot on ‘America’s Next Top Model.’ Kris was responsible for her daughters Kendall and Kylie appearing in weird and scary pose as the creepy twins in ‘The Shining’ – and when Bruce found out he went ballistic.

Sources for The National Enquirer, reveal in the Print Edition, March 26:  “Kris was crying hysterically when she finally got Bruce on his cell phone.  She sobbed that she was sorry for everything and that if he came back, they could get their marriage back on track.”

“But Bruce is fed up with his wife’s cold, bloodless ambition for the children.  He was so angry he wouldn’t even tell her where he was.  Bruce returned two days later but the strife is far for over.  Bruce told her ambition is in her blood like a disease.”

‘They talked about marriage therapy as a last-ditch effort to avoid divorce.  But deep down they both know that there is very little left in the marriage to save.’

More: The Kardashian Sisters Are Totally Humiliated By Their Mates

Bruce has every reason to leave Kris – what person in their right mind would stand idly by and watch as their darling children were transformed into fame whores?