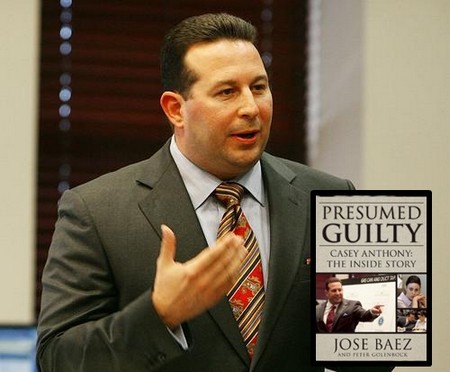 Jose Baez who’s known for being the attorney of murder mom Casey Anthony has written his own book to tell the world what happened from his point of view.  According to Radaronline, at some point in the book he actually mentions that his client’s car smelled like a “dead body!”.  His book, just in case you’re interested in knowing, is titled “Presumed Guilty, Casey Anthony: the Inside Story”.  I can tell you one thing, this is not a book I will be running out to buy.

Casey was acquitted a year ago for murdering her very own daughter Caylee.  During the trial there were several witnesses put on the stand that testified they had smelled decomposition in the trunk of her car.   In his book Jose Baez claims the first time he took a look in the trunk of Casey’s car he said,  “I could smell something rotten, I had been to a morgue before and my first impression was that this smelled like a dead body. I smelled something else, a chemical-like substance. If you took a good strong whiff, it almost hurt your nostrils. ‘Oh my God,’ I thought. ‘I’m going to have to talk to Casey about taking a plea.'”

Not only did Jose think the trunk smelled like a dead body, Casey’s father George Anthony, testified that when he went and picked up his daughter’s car from the impound lot there was a weird smell that caught his attention “something that you would never forget.” Casey’s mother, Cindy Anthony, called 911 in 2008 sometime around July and told the operator “There’s something wrong. I found my daughter’s car today and it smells like there’s been a dead body in the damn car!”

Finally Jose spoke to a forensic expert expert to ask for a confirmation as to whether the smell in Casey’s car was from a dead body.  The expert told him, “You never know whether its decomposing garbage or a decomposing body.”

Consequently, Jose had his answer and did not need to talk to Casey about taking a plea.

This isn’t looking good for Casey Anthony, we heard back awhile ago she wanted to live a quiet and peacefully life away from everyone.  But now that there’s a book about her whole case revealing a lot of details, my guess is that she will continue to run, but I doubt if she will be able to hide.

What do you think about Jose’s claims of smelling a dead body in Casey Anthony’s trunk?  Is he just trying to sell books and wants to shock people into buying them?