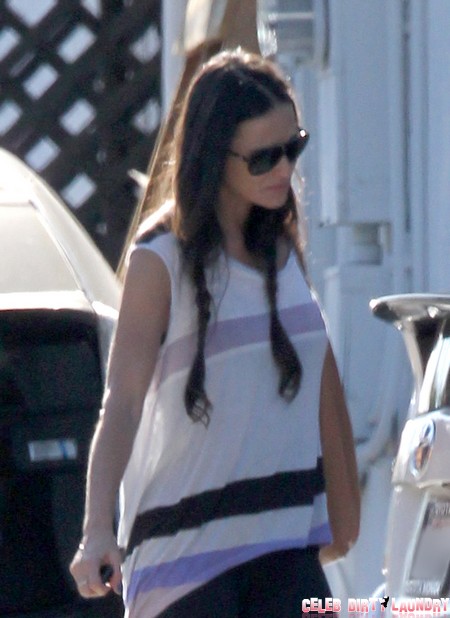 Demi Moore is on the prowl again for her next man love and, according to some sources around the web, she’s going after Leonardo DiCaprio, with whom she had a brief fling nearly fifteen years ago. After splitting from Ashton Kutcher, she’s trying to rekindle the flames between the Titanic prince and her — and she doesn’t even care that he’s currently in a committed relationship with Erin Heatherton, a Victoria’s Secret model!

“Demi is so lonely and hungry for love,” a source for the National Enquirer revealed. “After all these years, she’s romanticized what really amounted to just a fling.” And fling is right. Back when Demi and Bruce Willis’ marriage was on its final leg, Leo allegedly spent the night with Demi. But it didn’t go any farther than that. And now she seems to be getting her hopes up for naught. “She’s infatuated with the idea of her and Leo becoming Hollywood’s hottest power couple. She’s lonely and facing her 50th birthday this month, so she’s looking to rejuvenate her love life and career.”

According to this source, Demi has been spending a great deal of time in NYC, where Leo is currently filming a new movie. But according to the source, Leo continues to blow her off and won’t even meet up with the star for a simple cup of coffee. Oooh, ouch. Burn. Why do you think Leo is giving Demi the cold shoulder? Probably because he already has a lady, that’s why!

“Demi’s dream is to find a young, successful guy who can help elevate her back to her past glory. But she’s barking up the wrong tree with Leo. He idolized her when he was in his 20s and fresh off the blockbuster success of Titanic, but now Leo thinks Demi is too old. He doesn’t want to get tangled up in her messy life.”