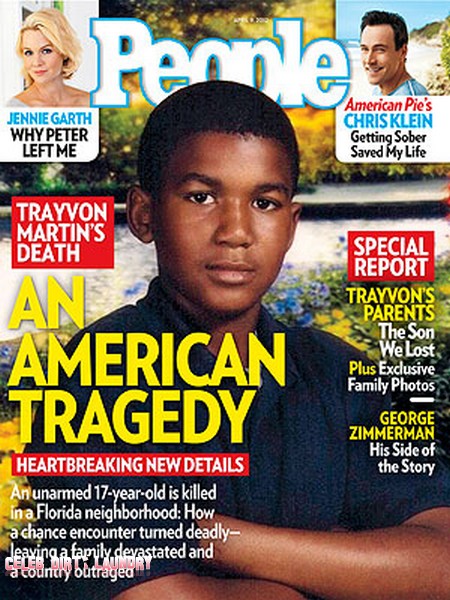 The April 9th issue of People Magazine features the cover story ‘Trayvon Martin’s death – An American Tragedy.’   The magazine claims they have heartbreaking new details in the killing of an unarmed 17-year-old Trayvon Martin in a Florida neighborhood.   The slaying of Trayvon a Florida high school student who was shot and killed by George Zimmerman, a self-appointed neighborhood watch captain, during a routine neighborhood watch patrol has captured national attention.

The magazine has a special report on the shooting as well as exclusive family photos.  They also have George Zimmerman’s side of the story.

People has more: The death of Trayvon Martin – and the police decision not to arrest Zimmerman – has devastated Martin’s parents, set off a nationwide debate, and prompted President Obama to speak out in unusually personal terms.   But a friend of Zimmerman says the Florida man is going through his own torment.

“He’s not the man that I knew before the shooting,” Joe Oliver says “He’s a completely different man; he’ll never be the same. He prays for Trayvon and he prays for the Martin family. He is so distraught that he took a life. That’s the price he had to pay for saving his own.”

For more information on the case and an exclusive interview with Trayvon’s family, pick up the current issue of People Magazine on stands Friday.