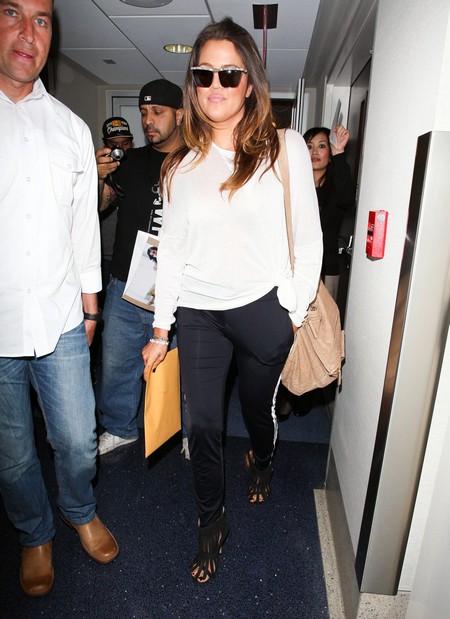 Khloe Kardashian has had several miscarriages and her dreams of having a baby have always ended in heartbreak.  After a tragic miscarriage in February, Khloe Kardashian turned to desperate to get pregnant again.  All that Khloe wants is to have a child with Lamar before it is too late – as she hopes to salvage their sinking relationship by producing a child of their own.  “She’s scared that if she doesn’t give Lamar baby, then he will leave her,” a friend reveals.  Of course having a child certainly didn’t keep Lamar faithful to his previous wife… but Khloe is an optimist.

Khloe is trying acupuncture as she is desperate to conceive as soon as possible.  A friend says “Khloe has been told by doctors that she suffers from polycystic ovary syndrome. So she is trying every possible treatment in an effort to make herself more fertile, from monthly vitamin B-12 injections to acupuncture.”

“She heard about the acupuncture treatment from a friend in Dallas and is undergoing weekly sessions,” says another good pal.  “She would do anything to have Lamar’s baby, even if it means getting stuck with needles.”

An insider heard that the couple has gone through several failed IVF attempts in recent months, in addition to her miscarriages – which her rep denies.  IVF involves a series of “painful” procedures, including shots of hormones that can wreak havoc on the emotions.  “It’s been really a hard time for Khloe,” the insider shares.

Kris Jenner, Khloe’s momanager, has been less than supportive of her daughter – telling her she is looking ‘a little too fat’ right now.  It could be Khloe’s hormone shots to assist with her IVF pregnancy plans that are packing on the pounds.  Kris has also been trying to get Khloe to divorce Lamar to boost ratings for all the Kardashian reality TV empire – clearly the woman is heartless.

In Touch Print Edition, April 23 reveals the sad story:  “She’s trying to put on a brave face, but it’s so hard,” reveals a friend of Khloe, who had been so excited by the news she was pregnant, she’d already begun checking a prenatal yoga classes and doulas. “She is really depressed.”

While her older sister, Kourtney, seems to get and stay pregnant at the drop of a hat, and her husband, Lamar Odom, had no problem having children in his previous relationship, Khloe longs to give Lamar another child-but hasn’t been able too, no matter how hard she’s tried.

“She suffered a few miscarriages,” an insider heard.  “Now, poor Khloe is coping with fears she may be unable to carry a baby to term.” She has so many sad days,” the insider confides.

Khloe is a sad shape.  Perhaps adoption would be the best route for her.  Better yet, perhaps Khloe should make sure that her marriage is going to survive before worrying about having children.  What do you think?  Let us know in the comments below.