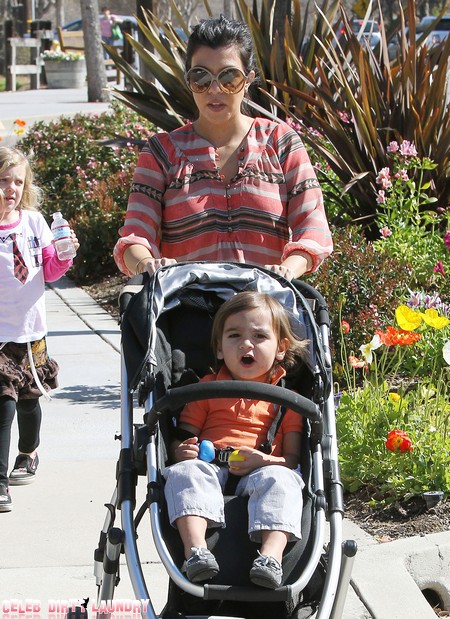 Kourtney Kardashian has laid down the law to Scott Disick with a set of five stringent rules now that she is very pregnant with their new child.  Scott faces immediate excommunication from the Kardashian Empire which now provides the playboy with the bulk of his income should he prove unable to follow these special rules.

Kourtney is understandably upset with Scott – his rumored cheating – his unrepentant womanizing – his incessant clubbing – his negligent attitude towards both her and their 2-year-old son Mason – his alcoholism – and his generally slothful lifestyle have pushed Kourtney to the edge.  Scott behaves like a self-centered dilettante with not a care in world… but with Mason needing his daddy and another child on the way Kourtney is finally done with this nonsense.

So Kourtney, in consultation with her coven, comprised of momanager Kris Jenner and sisters Kim and Khoe Kardashian, decided to establish some rules for Scott.

In Touch Print Edition, May 14 shares some intel on the new rules Scott must obey:

1)      Scott must continue to attend couple’s therapy where he gets shit from both Kourtney and the therapist… naturally Scott hates this humiliation but what choice does the Lothario have?

2)      Mason needs his papa but Scott could care less.  Scott spent more time in clubs partying when Mason was a baby then he did with his son – and publicly bragged that he never changed a diaper – well all that needs to change STAT.  Scott is going to be a hands-on dad from now on or else!

3)      Scott must stop drinking – he is an angry drunk who has told friends that ‘drinking helps him deal with Kourtney’s family.’  Good luck with this one!

4)      Scott must get a real job!  Scott did open a restaurant recently in NYC called RYU but will he stick with it?  Plus, being in that environment is going to make it much harder for him stay off the booze!

5)      Kourtney’s final condition is that Scott stop taking ‘guy trips’ to his favorite party towns like Miami and Las Vegas – I wonder why???  Furthermore, Kourtney has stipulated that she has to be right by Scott’s side on any trips he does manage to take.

Let’s be serious here.  Kourtney wants to marry a handsome model and Scott wants fame and fortune… so now they have each other.  She bought him and he agreed to be bought.  What doesn’t begin with respect doesn’t end with respect.  What do you think?  Do you think it is a good idea to hook up for money and prestige?  Do you think that Scott loves Kourtney?  Let us know in the comments below.