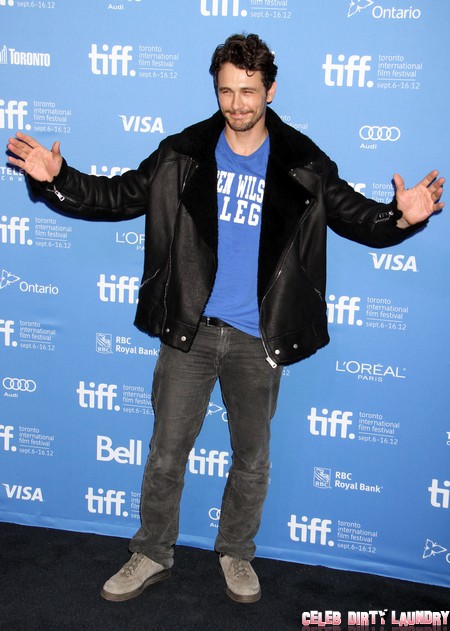 We all know that James Franco is a huge fan of Kristen Stewart. He wrote an essay about her a couple months ago called, “Kristen Stewart the Queen,” which is probably the nicest thing anyone has ever said about her on public record. His essay included gems like, “Stewart has braved more scrutiny of her private life than most presidents,” which is totally true. Remember when Kristen was all over cyberspace after making the controversial decision to cut healthcare to children of veterans? Major drama! (Joke, Kristen is dumb and James is obviously on some sort of narcotic.) He praised her indie flicks: “she has taken big career risks by doing films like Welcome to the Rileys, The Runaways and On the Road (nudity, I hear). She has worked her ass off.”

Well it sounds like James might be getting to see more of Kristen than even viewers of On the Road (in which she is topless). Sources at the Toronto International Film Festival reported seeing them together. One dishes, “I watched [Kristen and James] chatting for about 20 minutes. Kristen was surrounded by bodyguards, but I could clearly see how excited they were, laughing and flirting. James invited Kristen for a dinner that night, and someone [said] that James thinks Kristen is beautiful, and an amazing actress.”

ROFL. Seriously. Kristen has all of the acting talent of a dead fish held up with string. She is incapable of emoting. Then again, every fiber in my body hates James Franco after he was such a dick at the Oscars in 2011. So maybe I’m biased.

Well, anyways, a second source confirmed their little date, “Kristen and James Franco chatted for like 10 minutes in a corner [at Toronto’s Soho House], looking flirty. Kristen went to a mysterious third floor and James followed her.”

Wouldn’t it be the sweetest thing if they married, did weird films together, constantly asserted their dominance by holding their chins high while their eyes look like deep pools of death, and then disappeared from the world after deciding to walk naked into the Amazon together (as part of an artists retreat or something)? So poetic. And then my days would be free of them!

What do you think? Is Kristen warm for Franco’s single voice of praise among all her critics? Is it a match made in heaven?