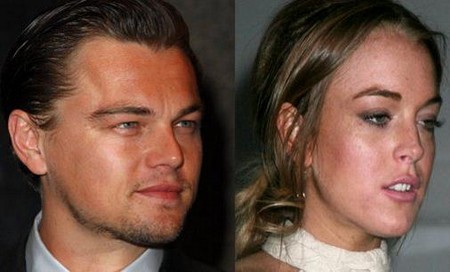 If you still think Lindsay Lohan is firing on all cylinders than this should set you straight. She actually thinks she has a chance with Hollywood golden boy, Leonardo DiCaprio, and has been pursuing him shamelessly over the last few weeks, a source from In Touch Weekly says.

“She has been texting Leo constantly, asking him to get together,” says the insider. “They used to hook up a long time ago, and she wants to get back together with him. She also hopes that he will get her some auditions as well.”

I definitely question the “they used to hook up a long time ago part.” In Lindsay code that means she saw him a couple times at Chateau Marmont and she waved and he never waved back.

It’s like the test question you found on your SATs, “pick out the word that doesn’t fit the group”.  Try this one: Gisele Bundchen, Bar Rafaeli, Blake Lively, Erin Heatherton… Lindsay Logan? Man, I wish the SAT questions were this easy!

Naturally, this isn’t the first time she’s tried to famewhore all over the Oscar nominee. She crashed a party of his back in 2011. Right after her Playboy shoot and, charmingly, before she had to go to jail for probation violations, Lindsay talked her way past security at the Leo-helmed J.Edgar party.  She made everyone “uncomfortable” all night as she tried to claw her way into Leo’s good graces. Interestingly enough, he wasn’t having it.

“Eventually they let her in, but she made everybody uncomfortable. She was aggressive and random, storming around. She tried to get to Leo, but he was surrounded by his security and a posse of his friends.”

Oh Lindsay! Why is it always one step forward, 10 steps back? So despite not looking not so horrible at Coachella recently we think she’ll do better sticking to Sam Ronson.

She got breaks this week! She finally was hired to play Elizabeth Taylor in the new Lifetime flick and scored a guest spot on Glee. But the good news was quickly marred by Rosie O’Donnell’s harsh, but true, comments about Lindsay’s stability which Lindsay then, good naturedly, exampled by showing up SIX HOURS late to shoot her GLEE scenes and then missed her flight to DC for Saturday’s Fox dinner with Kim Kardashian… and President Obama.

When is enough going to be enough? How many chances do you think Lindsay should get? Even if it was a cat, her career would have died ages ago!