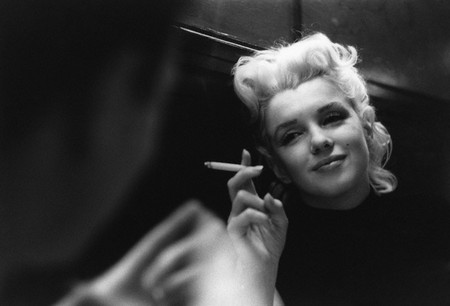 Marilyn Monroe was the darling of an entire generation. Women wanted to be her and men wanted to have her. She became one of the most well known icons in the history of Hollywood due to her gracious beauty and unparalleled sex appeal. There were many dark secrets that surrounded Marilyn and took a hold of not only her career, but also surrounded her iconic image for decades after her death. A shocking new book claims that Marilyn was secretly sexually attracted to women, and not men, as was previously believed.

Okay, remove your jaws from the floor and stop ripping your Marilyn Monroe posters. It isn’t that bad!

According to The National Enquirer, Marilyn admitted to sexual encounters with film stars as diverse as Joan Crawford, Barbara Stanwyck, Marlene Dietrich and Elizabeth Taylor. She also allegedly seduced a 16-year-old girl who ran her fan club. Marilyn must have had the guts of a neurotic person addicted to pills to have pulled this off in the 50’s. Oh, yes, sorry…

The author Tony Jerris alleges that Marilyn had an affair with Jane Lawrence, the teen. They allegedly bonded because of their shared family histories. Jerris authored the spectacular novel called Marilyn Monroe: My Little Secret (Dude, this is seriously not a little secret!).

He told RadarOnline.com in an exclusive interview, “Jane met Marilyn when she was 12 because her adopted father ran the legal department at RKO studio. They soon became close friends after realizing that they had been in the same orphanage at different times of their lives, even though Marilyn was 14 years older, and neither of them knew their birth fathers. They became close friends because there were so many similarities in their past.”

Marilyn seems to have been extremely understanding of Jane’s sexual preference and said to her, “Whatever [sic] your sexual preference is, it means nothing – love is love.” If only we had the poetic license to have added [hic], instead of [sic]…

Tony met Lawrence in 2001 and the two went on to become close confidantes and business partners.

My Week with Marilyn seems to have been more like My Night with Marilyn when the two had an encounter in 1955. Lawrence allegedly went to Monroe’s apartment and assisted her in lining shelves. No-one told us that lining a shelf was sexual, nor did they tell Lawrence, because the gay ol’ time they had before the shelves turned into late night shenanigans and a scratchy Etta James record afterwards.

Lawrence says that the then 29-year-old actress was drinking champagne and had taken Nembutal when Lawrence arrived. Marilyn said to her, “The champagne makes me happy. The pill makes me happier faster.” Lawrence’s teen idol placed a kiss on her thigh with a “mischievous twinkle in her eye”.

Lawrence continues, “The next few minutes became hazy, surreal and dream-like. My pulse leaped as Marilyn kissed my thigh again… she then leaned in and kissed me full on the lips, very softly and very slowly. I was nearly hyperventilating. We moved through the living room into the bedroom. Marilyn used her tongue, lavishly flicking and licking, an entirely new sensation for me. With the girls I had enjoyed sex with, there was often a shyness and hesitancy, not the hunger and confidence Marilyn displayed.”

Lawrence and Marilyn remained friends and lovers for almost ten years, until Marilyn’s death at age 36 in 1962.

Do you think Marilyn Monroe kissed a girl and liked it? Do you think the novel is a complete fabrication? Let us know your  thoughts below.