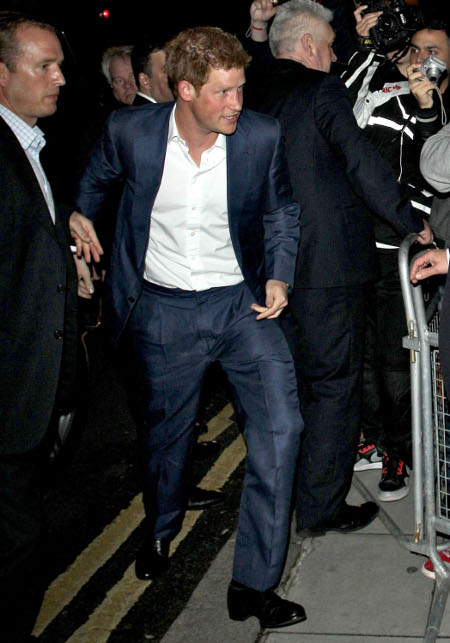 Prince Harry‘s naked photo scandal continues to turn into something much, much more. Now, word has gotten out that there were hookers, as well as a well known cocaine dealer, in his hotel room during the time of his naked party. This news arrives on the tail of other reports claiming that the party was video taped and that drugs and other forms of craziness were occurring in the party.

A source exclusively told Radar Online, “A really good friend of mine is a cocaine dealer and texted me from the hotel room while the party was happening and said, ‘Guess where I am?!?’ Turns out he was in the Wynn suite with Harry, his pals and all those girls.”

There was also a lady at Prince Harry‘s hotel party who is known by many to be a prostitute, or at least a woman who willingly exchanges sexual favors for gifts. “My friend won’t give up any of the details about what happened in that hotel suite, including whether or not Harry was doing coke, but he was definitely there. Things got pretty crazy in Prince Harry’s suite that night. Everyone was drinking and drugs were also being used by some people.”

So, Harry might be in the clear as far as the drugs are concerns, as no one (yet!) has decided to rat him out. However, others were definitely doing drugs. “Some people were snorting cocaine,” says the source. “Some were already rolling on shrooms (hallucinogenic mushrooms) when they arrived at the party, and some were just high on weed. And that’s exactly why no one there has come forward on the record…they don’t want to be implicated for any illegal activities.”

Things just continue to get worse and worse for the naughty ginger prince, and I wonder when all this — what I like to call — scandalosity and allegedality will calm down for the royal bloke. What do you think? How much longer do you think the world will be talking about Prince Harry’s scandal? Let us know in the comments below. Also, let us know if you’re Team Harry or Team Harry’s a Royal Fool.