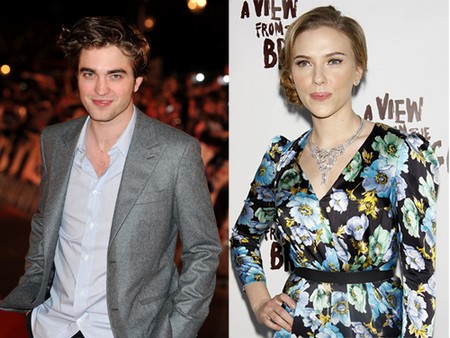 Robert Pattinson has several new projects in the works, one of which is rumored to be including Scarlett Johansson.  This new tidbit came to light in a snippet from producer Michael Benaroya, who was in Cannes promoting his latest project.  He is said to be financing the 11 million dollar film, “Hate Mail”, which will feature Robert Pattinson, Scarlett Johansson and Phillip Seymour Hall.

A short synopsis of the film: A Manhattan-set story centered around people who receive hate mail and the subsequent effects on their relationships.

Variety mentioned the project back in 2011 saying, “Hate Mail” will feature interweaving stories about several Manhattanites who encounter various iterations of hate mail and grapple with the subsequent fallout of their relationships.

It seems like it could be an interesting film.  Also interesting would be Kristen Stewart, Pattinson’s girlfriend’s reaction to him working with Scarlett.  Let’s see, Scarlett is stunning, has a personality and never, ever seems awkward around men.  She oozes sex and has chemistry with just about every guy she works with.  My guess is that Kristen isn’t too happy about this casting!

IMDb Pro says filming is set to begin this spring, but lists the project as still in development.

How does all of this sound to you?  Would you like Rob and Scarlett to share the big screen, has he found his new Bella?  Do you think they’ll have some serious chemistry?  Hit the comments below and let us know your thoughts!