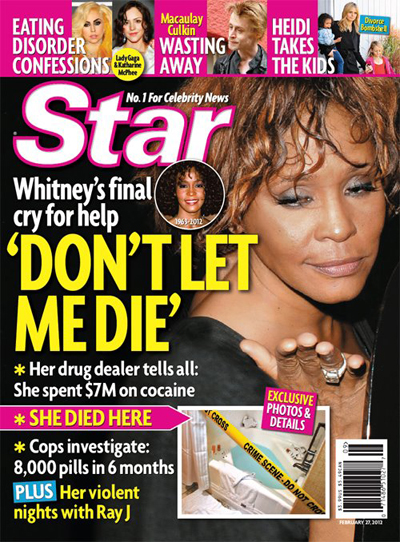 According to the magazine, the late singer’s drug dealer is reportedly telling all and among the sordid details is the fact that Whitney had spent $7 million on cocaine alone! No wonder she was in financial ruin at the time of her death.

Supposedly, the police investigation into her death at the Beverly Hilton Hotel this past weekend has also turned up the news that the singer had a violent relationship with her boyfriend Ray J (not unlike her turbulent marriage to Bobby Brown,) as well as a report that she allegedly bought or consumed 8,000 pills in just six months!

However, despite her ongoing and well-documented struggle with drug addiction, the Grammy winner supposedly realized in the final days of her life that she needed to get help and get clean. Unfortunately, it seems that realization and her final plea for help were just a little too late.

To find out more about Whitney Houston’s tragic last days as well as exclusive photos of the bathroom where she took her last breaths – pick up the current issue of Star Magazine for all the details!