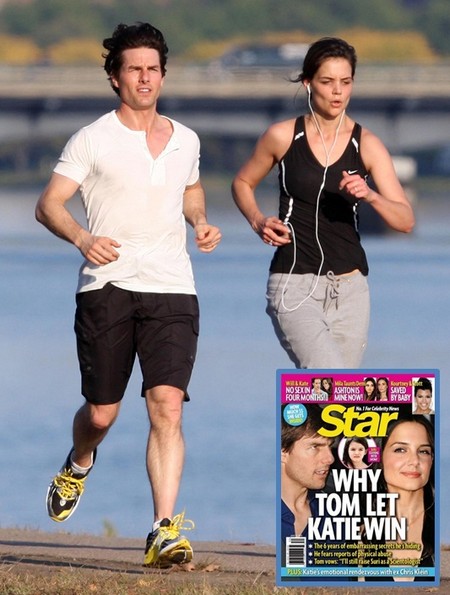 The current issue of Star Magazine features the cover story ‘Why Tom Let Katie Win.’ According to the magazine Katie Holmes knows six years of embarrassing secrets that Tom Cruise would prefer stay hidden away in a deep, dark vault.  He fears the years of physical abuse will be revealed, do tell, wonder what that is about? (Have to pick up the mag) Furthermore, according to the magazine Tommy vows to raise their daughter Suri as a Scientologist.  “I’ll still raise Suri as a Scientologist”, he said.

Now we all know Scientology is far more important to Tom than anything else.  Ex-Scientologist Marty Rathbun claims Tom actually chose his religion over Suri.  What is probably closer to the truth is, Scientology was not pleased about the negative publicity they were getting and Church leader David Miscavige probably pressured Tom into settling the divorce quickly.  I am sure he advised Tom to give Katie whatever she wanted to keep her quiet and make it all go away.  I am certain that is why Tom let Katie win!  What do you think?  Hit the comments and let us know!

Now their bombshell claim this week is that Katie has been seeing her ex-fiance Chris Klein to help her through the break-up.  That cannot be making Tom very pleased.  The two were engaged for 2 years when they broke up and Katie went on to marry Tom shortly after.

So it seems like Suri is staying put with Mom Kate and Star Magazine claims to know just how much $$$ she is getting and they reveal it all in this week’s issue.

Also included in this week’s issue Mila Kunis  is rumored to be seeing Ashton Kutcher and although the two have said allegations are absurd, they were caught cuddling.  Anyway, apparently Mila is taunting poor Demi Moore and letting her know Ashton is her man now!

To find out all theses details and more, make sure to pick up the current issue of Star Magazine!