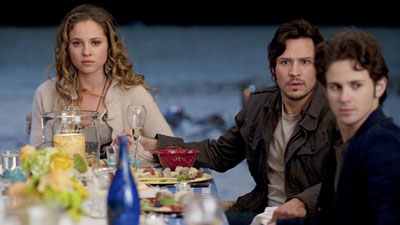 “Duress,” the eleventh episode of ABC’s Revenge, opens with a bang! Well, not literally, but the show’s midseason return does begin with Tyler (Ashton Holmes) holding a gun to Emily (Emily VanCamp)’s head during Daniel (Joshua Bowman)’s birthday party.

What has made the unlikable, trustafarian-turned-gay hustler-turned-blackmailer resort to murder, you may ask?

Well, if you remember, in the last episode, Tyler had stolen Nolan (Gabriel Mann)’s flash drive and was planning to use its damning contents to blackmail the Graysons. Unfortunately, for him, Emily foils his plans in this episode by reuniting with Nolan (She begins her apology with: “I googled friendship on the Interwebs“) and, then, with his help, finds the flash drive that Tyler not-so-carefully hid in his duffel bag at the Grayson’s pool house, along with his anti-psychotic pills.

Flashing back to two days before the gun scene, we see Daniel and Emily enjoying a cup of morning coffee at her house, unaware of the drama that is about to unfold. When Daniel mentions that his birthday’s coming up and that for his last birthday, his mother, Victoria Grayson (Golden Globe nominee Madeleine Stowe) recruited Cirque Du Soleil acrobats to perform, Emily suggests a low-key clambake on the beach.

Meanwhile, Victoria and Conrad (Henry Czerny) begin their divorce negotiations with their lawyers present. Unable to agree on who will retain ownership of Grayson Manor as well as the custody of their teenager daughter Charlotte, Victoria’s lawyer pulls out his client’s trump card and claims that the prenup Victoria signed when she first married Conrad is void because she was pregnant at the time and therefore under “duress.”

Later, Victoria confides to her lawyer that she faked the pregnancy and lied to Conrad, and we also see that Emily recognizes the lawyer when she comes to raid the poolhouse to find Nolan’s flash drive. It seems that at the time of her father’s trial, the lawyer ignored evidence of David Clarke’s innocence. Could he still be on the Conrad Grayson’s payoff payroll?

Tyler loses his last fan(s) when Emily confronts Ashley (Ashley Madekwe) and Daniel with the fact that Tyler is dangerous and deranged, especially now that Emily has taken his medication. However, after attempting to contact Tyler’s doctor, the all-knowing Nolan manages to track down Tyler’s brother and arranges him to fly out to the Hamptons on a private jet in order to wrangle his seriously disturbed brother, who has been on the lam from his family since escaping a mental hospital.

Emily invites Nolan to Daniel’s birthday party, but Nolan never makes it because despite putting a GPS tracking device on Tyler’s phone (and declaring that “Technology never lets me down,“) Tyler shows up at Nolan’s mansion, sans his cellphone, and slashes him with a knife, before realizing, thanks to the video camera feed from the flash drive that Emily put back in her home as a mantlepiece, that what he’s looking to recover is actually back at Emily’s house.

Inconceivably (but perhaps the writers needed to give them a plot line) Jack (Nick Wechsler) and Amanda (Margarita Levieva), along with Charlotte (Christa B. Allen) and Declan (Connor Paolo), are not only invited to Daniel’s birthday shindig but even help out with organizing it! And because Charlotte’s parents are trying to stay on her good sides, the Graysons manage to be polite to Jack and Declan, although Victoria does manage to get a good jab in about Amanda: “All I can see is a pretty girl with cheap shoes and limited social graces,” she says of the girl she thinks is her dead lover’s daughter.

Despite the frostiness between the elder Graysons and between Emily and Victoria (who totally stole Emily’s gift idea of giving Daniel a scrapbook,) the party proceeds from dinner to presents. However, when Emily goes back into her house to retrieve the cake, Tyler has been waiting for her. After a confrontation, he pulls out Emily’s own gun from her desk and marches her back to the beach with the cake, where he threatens everyone with a game of “Truth Or Die.” (But not before making a dramatic entrance to “Happy Birthday.”)

Right before he looks like he’s about to pull the trigger, a wounded Nolan (Sidenote: where did his bodyguards go and why did some random business-looking guy rescue him?) and Tyler’s brother burst onto the scene and manage to distract Tyler long enough for Daniel and Jack to tackle him and save the day.

And while this episode does not give us any more details about Emily’s past, the demise of Tyler has allowed Emily to use him as a patsy to wrap up some of the messy details of her previous take-downs that would otherwise cause suspicion to fall on her. She even managed to slip the now deceased Frank’s wallet into Tyler’s pocket before he threatened her with the gun. Clever girl!

The preview for the next episode of Revenge shows Daniel getting closer to proposing to Emily, as marriage is seemingly the only way that he would be able to have his trust fund released from his father. Little does he know that his own murder, as depicted in the pilot episode at his engagement party to Emily, is getting closer too!