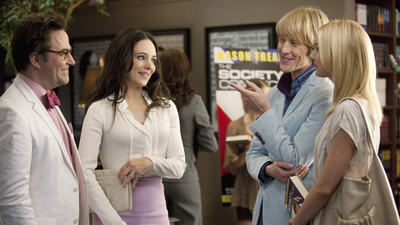 With all of the madcap drama from the last episode behind them, things are mostly back to normal for the characters of Revenge.

In “Infamy,” the twelfth episode of the ABC show, Emily (Emily VanCamp) sets her vengeful sights on a bow tie-wearing, local author named Mason (Roger Bart), who is working on his memoirs, after having risen to fame and fortune by writing an exploitative book about Emily’s dad. Originally, we learn, the journalist was sought about by David Clarke to write the real story of how he was wrongly framed for a terrorist attack by the Graysons.

However, not unlike other people Emily’s has enacted revenge on during this season, Mason ended up being bribed by the Graysons, and his book turned out to be a fraudulent tome that covered up their involvement. Not only that, but the book made young Emily believe that her father really was guilty of terrorism. This makes Mason a ripe target for the adult Emily to take down.

Meanwhile, Daniel (Joshua Bowman), who has put off business school in order to continue working for (and spying on) his dad, Conrad Grayson (Henry Czerny), tells Emily that he’s considering moving back in with his mom, Victoria Grayson (Golden Globe nominee Madeleine Stowe), whom he has sided with in his parent’s divorce. However, he suggests that maybe he and Emily should move in together back in New York, after the summer is over. Emily replies by playing the dead parent card and tells him that she wants to honor her late parents’ traditional values by waiting until she’s married to move in with anyone. (It’s hard to tell, though, if this actually the truth, or somehow a part of her plot to destroy his family.)

This, combined with the fact that Daniel can only gain access to his trust and shares of stock in the family’s business before the age of 30 by getting married, sets the stage for him to propose to Emily in the next episode, in order to help his mother become the majority shareholder of his father’s company.

Victoria continues to pull Mason’s strings by demanding that he talk to Amanda (Margarita Levieva) about why she’s back in town. Aided by Emily, aka the real Amanda, and Nolan (Gabriel Mann), who is little more than set dressing in this episode, the fake Amanda gives an uncanny performance that manages to scare Mason, thanks to an ear piece into which Emily feeds her dramatic lines.

Shaken, Mason realizes that Amanda could out him as a fraud but is too afraid of Victoria to do anything about it.

In return, Emily burns his house down, including his precious memoirs, but not before stealing the video footage of Mason’s interviews with her dad.

Over in Montauk, Amanda, who may or may not be thinking about settling down with Jack (Nick Wechsler) for good, is livening up the Stowaway bar with her wild antics, including making out with a girl and walking around in the bar, liquor bottles in hand.

“What is that?” one girl asks, when Amanda lights a glass of vodka on fire.

Jack’s tightly wound ways seem to be ruffled by Amanda’s behavior, but, at his brother Declan (Connor Paolo)’s insistence, he ultimately relents and promises that he will loosen up and take her on a gambling trip to Atlantic City.

The major bombshell of the episode is not that Daniel will propose (since we’ve know about that since the pilot episode), but that Emily discovers that Charlotte might actually be her half-sister! On one of the video tape interviews she stole from Mason’s house, we see a clip of David Clarke telling Mason that Charlotte (Christa B. Allen) was born during his affair with Victoria.

On next week’s episode, Daniel proposes (in the rain!) to Emily, Victoria confronts Amanda, and someone beats up Jack!