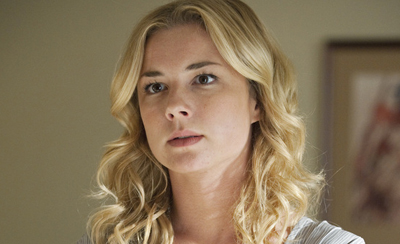 After two weeks of reruns, ABC’s Revenge is back with a new episode this week. “Perception,” the fourteenth episode in the series, begins with everyone receiving their invitations for Emily (Emily VanCamp) and Daniel (Joshua Bowman)’s “Fire and Ice” themed engagement party. In typical Revenge fashion, Emily narrates the opening credits:

“If the doors of perception were cleansed, everything would appear to man as it is…infinite,” Emily quotes from a book that a “boy” once introduced her to. “But, in reality our perception is clouded by expectations, by experiences. As of late, I find my perception is blinded by only one thing, revenge.”

In a flashback, we find out that the boy in question was actually Daniel Grayson, who Emily stalked at Harvard and even met, while wearing brown hair, glasses, and a really bad Boston accent to disguise herself.

Emily thinks about this moment when getting her photo taken for their engagement portraits, as the photographer asks the couple to remember the moment they first met.

Meanwhile, Emily is plotting to reveal the secret that Charlotte (Christa B. Allen) is her half-sister by sending her a DVD of David Clarke’s interview, where her father claims that he had an ongoing affair with Victoria (Madeleine Stowe). She decides to wait until that evening’s family dinner party with Grandpa Grayson to give it to her for maximum impact, especially since Victoria has recruited Conrad (Henry Czerny)’s dad to threaten him to keep his mouth closed about Charlotte’s paternity.

Over in Montauk, lovelorn Jack (Nick Wechsler) is upset that Amanda (Margarita Levieva) ditched him with just a note saying that “trouble follows her” and is recovering from the beating he received in episode thirteen. His buddy Nolan (Gabriel Mann) even surprises him with a large-screen TV.

Still, when Jack attempts to throw away his invite to Emily’s engagement party and misses the waste basket, he picks it up off the floor at an angle that allows him to find the missing, hi-fi tape that Emily dropped under the bed when she planted Mason Treadwell tapes in Amanda’s bags for Victoria’s henchman to find.

Jack leaves yet another voicemail for Amanda, letting her know he has her tape, which sends Emily into a “Must Get The Tape Back” tizzy, in which she employs Amanda, who has been hiding out in a motel nearby, to call Jack and ask for it back.

Jack shows up at Amanda’s motel and seems truly gutted that she has nothing else to say except to ask for the tape back. And even though Amanda is following Emily’s orders like a loyal lackey, you can tell that her heart is breaking. Still, Jack refuses to give her the tape and storms off to watch the tape, so he can “see everything that was worth throwing what we had away.”

To do that, he asks Nolan to help him play the tape, since it’s an old format, and although Nolan has promised Emily that he won’t let him watch it, Nolan gives in and plays the tape, knowing that it might be the only thing that gives Jack some closure.

Instead, when Jack sees the young Amanda during the interview with Mason, crying about how Victoria Grayson loves her father and will help her, Jack storms over to see Amanda again. This time, Amanda stays in the motel room, while Jack pounds on the door. Confused, she calls Emily to ask why she had to push Jack away, if he ended up watching the tape anyway. After telling Emily that she’s done listening to her, she runs after Jack but doesn’t catch up to his car.

Meanwhile, over at the Grayson mansion, Emily shows up for the dinner party and just happens to see a package at the door for Charlotte that she gives to the housekeeper. The package, of course, is one that Emily put there herself with the DVD that exposes Charlotte’s paternity. However, when Emily sees that Conrad and Charlotte have reconnected, she changes her mind and takes the package back.

However, the truth comes out anyway when Jack storms over to the Grayson house and bursts into the room to confront Victoria, just as the family has sat down for dinner. “I know you were in love with Amanda’s father…I’ve seen the video tape,” he yells at Victoria, telling her that she has done nothing to help Amanda. Daniel attempts to come to his mother’s defense, which prompts Conrad to tell Charlotte and the table that David Clarke is her biological father. The revelation causes Victoria’s lies about being raped by David to be exposed, and as she silently gets up and walks away from the table, we know that her relationship with her children is never going to be the same.

Even more shocking is when Amanda returns home from the party and finds that someone has been in her house and stolen her revenge box that she hid in her floorboards! In its place is an invite for her engagement party with the words “Emily Thorne will attend” scrawled in red ink. Could it be Amanda who stole Emily’s revenge box and filled out her engagement party invite? She certainly has the motive and the means to turn on Emily, considering that she already knows her true identity and is angry that Emily forced her to break off her relationship with Jack for no reason.

Or, as some others are speculating, could it be another, more innocuous character like, say, Ashley? Although Ashley’s character is usually nothing more than set dressing, we learned several things about her background this week: that she’s not particularly close to her family and that, as Conrad points out, Ashley’s “too refined to be a grifter and too smart to be a lackey.”

More interestingly, we will presumably find out in next week’s episode who shot Daniel in the pilot episode! Emily is shown loading her gun, but could Revenge‘s heroine really be capable of murder?