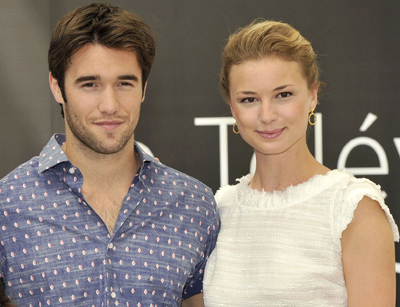 Oh la la! It may seem like a scene from an episode of next season’s Revenge (one where Emily and Daniel elope to the French Riviera,) but it’s actually just real-life lovebirds Emily VanCamp and Josh Bowman enjoying a vacation while in Monaco.

The Revenge co-stars visited the tiny European principality to promote their ABC drama at the Monte Carlo Television Festival but couldn’t keep their hands off each other during some down time at the pool, reports TooFab.com.

At one point, Josh playfully placed an ice cub on Emily’s chest and stomach, before getting cuddly and kissing her passionately in their lounge chairs. The couple also fooled around while in the pool! Read More: Emily VanCamp’s Revenge Survives The Cut And Gets Picked Up For Another Season

Emily, 26, and Josh, 24, have been dating since last winter and must have a soft-spot for France, as they were first spotted together, ringing in the New Year in Paris.