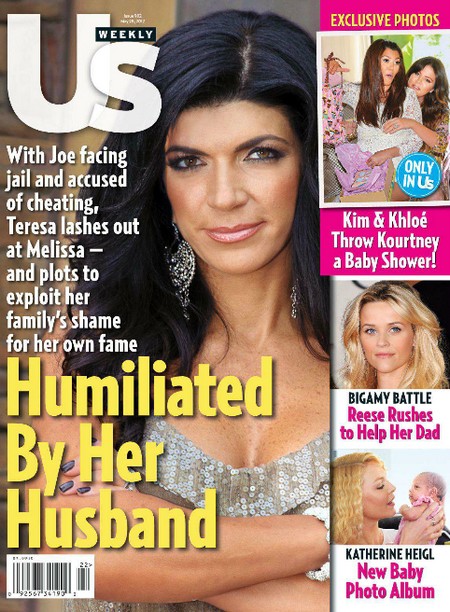 The current issue of Us Weekly features the cover story ‘Teresa – humiliated by her husband.’  The magazine claims that with hubby Joe Giudice facing jail and accused of cheating, Teresa Giudice is plotting to exploit her family’s shame for her own fame.

Will this woman EVER learn?  Teresa Giudice prances around like a prima donna and insists she has the best, most stable marriage in Jersey.  It might be a little bit more believable if she didn’t always have her false eyelashes in a knot.  One look at this screwed up couple tells a totally different story and this weeks’ issue of Us Weekly has the cover story that Teresa Giudice is humiliated by her husband – they are all over it.

To hear Teresa Giudice tell it, her husband Joe is the picture-perfect spouse and father. She bragged to Us that when she taped The Celebrity Apprentice last fall Joe jumped at the chance to play Mr. Mom. While she bunked at the Trump Tower in NYC last fall, Joe held down the fort at their 10,500 sq. ft. Towaco, New Jersey mansion. “Joe got to really bond with the girls,” she said. “It was pretty amazing. He said he loved it.”

But Joe has humiliated her at every turn. Among his offences: drunken onscreen outbursts, a DWI arrest, an $11 million bankruptcy filing and an indictment for using a false ID to obtain a driver’s license.

But she’s no angel. In a desperate attempt to deflect attention from her situation, Teresa has thrown mud at her sister-in-law Melissa Gorga of having a wandering eye.

However, in the April 22 season premiere of RHONJ, Joe sneered at daughter Gia to “shut up” when she asked why he was out the previous night with a number of women.

“It’s disgusting the things Joe says. Milania says hooker. Where does a 5-year-old hear that word?” Teresa revealed on the show that Joe throws the Gorgas’ presents for their girls in the garbage!

Sometimes it really is hard for me to figure out who I find more disgusting, Teresa, with her snotty, entitled, chronic liar routine or Joe who is a flat out criminal. I guess if the lying douche bag shoe fits, they’ll both take turns walking in it.

Any thoughts on Teresa and Joe?  Tell us in the comments below!