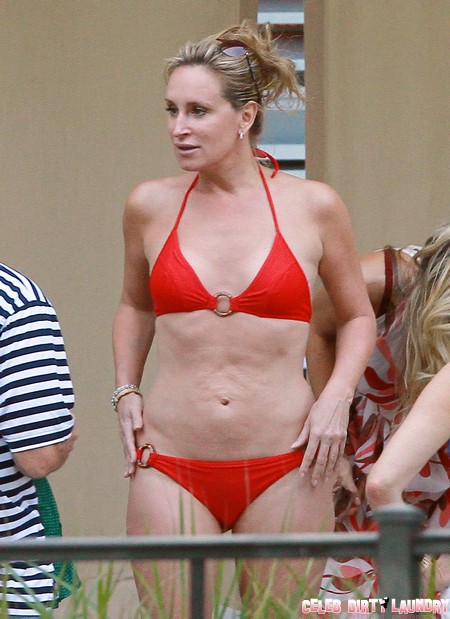 So much attention has been paid to The Real Housewive’s of New York City catfight between Sonja Morgan, Ramona Singer and Aviva Drescher, that we almost forgot about the fact that this crew of women went to an island together and drank tons. Obviously, when they weren’t screaming at each other some pretty interesting stuff must have happened, right? Oh so right.

Sonja is, at this point in her life, a hard partying, misguided, 48 year old that employs “interns” to keep her medication straight and wash her bedding (because she entertains everyone in her “boudoir” doncha’ know!) daily. Bravo has given its viewers to watch this woman have a full on breakdown, fueled by the alcohol and whatever else, almost in slow motion. Even the shows producers have decided that while generally they look for the juiciest footage to piece together, some of the St. Barts action was just too much even for cable television.

According to The New York Daily News, ‘Sonja [Morgan] was straddling cameras naked.’  Naturally that footage was left on the cutting room floor but it gave the crew that was filming a really clear indication of just how far gone Sonja really is. She’s said to be at her wit’s end due to filing for bankruptcy and trying to iron out a financial settlement as the final nail in the coffin of her ill-fated marriage to banking heir, John Adam Morgan.

The other ladies have said that Sonja was blind sighted by the divorce and thought that the marriage was a happy one and that five years later, she is still reeling with hurt. The couple share a young daughter that Sonja says comes first and foremost in her life but I have to wonder what she’s think if she caught a minute of mommy’s antics on RHONY!

There is going to come a point in time where Sonja will have to admit that she’s in need of a bit of help and perhaps now that the world knows that she climbed a bit higher on the “white trash”-o-meter, it’ll be soon!

Is Sonja a lost cause? Do you think this is simply who she really is and all the rumors of her going through extra stuff right now are greatly exaggerated? Tell us your thoughts in the comments below!