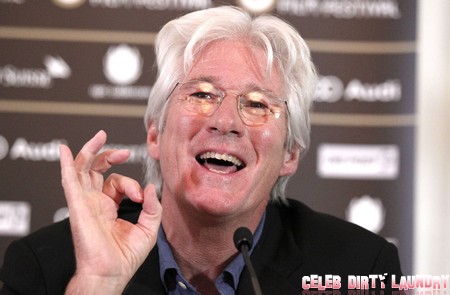 The dashing and charming Richard Gere is officially able to add another badge to his adjectives – courageous. According to a source, Gere went to Nick & Toni’s diner in East Hampton on Saturday night after receiving his lifetime achievement award at the Hamptons International Film Festival. Gere didn’t just eat extremely expensive food, but he also looked at the menu – no, literally, he flirted with another woman.

An eyewitness said, “He kept staring at this woman to the point where her husband seemed agitated by it.” Gere allegedly kept staring at a blonde patron at another table, approached the table she was seated at and leaned into her ear. The eyewitness said, “He approached the other table. He didn’t acknowledge anyone around her. He was leaning in and trying to talk to her, leaning into her ear.” According to the eyewitness, the woman was dumbfounded and kept “looking at Gere like, ‘What are you doing here?’” The blonde woman’s husband became severely aggravated, jumped up and yelled at Gere, “Hey, listen. Get the f**** out of here!” However, in true Gere fashion, he refused to leave. The eyewitness added, “He didn’t leave. He just tilted his heat to lean in. He bent back down to her. He didn’t give a f****. It was a bad situation.”

Gere left the restaurant after the little indiscretion, but the woman’s husband quickly followed on his heels to check that he left for good. Gere’s group stayed behind, but “there was tension in the room.” Allegedly, after he left, “the woman who caught his eye was trying to make her husband calm down. It ruined their night.” You crazy woman! It was Richard Gere for flying freak’s sake! Other women would give their left nipple to experience what you experienced, so stop complaining and enjoy the 15 seconds of attention. We’re joking, okay? We’re all for morality and monogamy.

Gere’s representative said that the entire incident was fictitious, “Reality is, he was at a table with his agents and their wives. On his way out, he stopped to say hi to people at that table, and joked with the people briefly before leaving.”

What do you think? Was it all made up by a fame whore? Did he really lean in and flirt with a blonde woman? Your comments are welcome below, because we’re stumped!