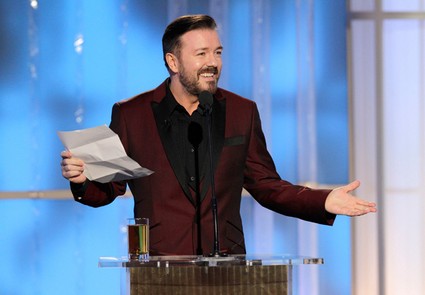 Ricky Gervais joked about Jodie Foster’s sexuality during the Golden Globe Awards last night and in effect outed her as a lesbian.  Gervais was slammed when he hosted the event in 2011 for insulting several celebrities in the audience – read out a list of topics he was banned from mentioning. But then he went for Foster using her movie ‘The Beaver’ as his angle.

He said: “The Hollywood Foreign Press have warned me that if I insult you or cause any controversy, they would invite me back next year. [They gave me] a list of rules, and this is real. No profanity. That’s fine. I’ve got a huge vocabulary.”

“No nudity. See, that’s a shame, because I’ve got a huge … vocabulary, but tiny penis. It works. I don’t care. It’s fine.  No smut or innuendo. Or I’m not to libel anyone.”

“And I must not mention Mel Gibson this year. Not his private life, his politics, his recent films or especially not Jodie Foster’s Beaver. I haven’t seen it myself. I’ve spoken to a lot of guys – they haven’t seen it either but that doesn’t mean it’s not good.”

However, Jodie appeared to take it all in good humour and responded with a thumbs-up sign before clapping.”

One person who didn’t take too kindly to Ricky’s jokes was ‘W.E.’ director Madonna.  He quipped: “Our next presenter is the Queen of Pop.  No, not you Elton. She’s all woman. She’s always vogue, she’s a Material Girl and she’s just like a virgin. Please welcome Madonna.”

Madonna fired back: “If I’m still a virgin Ricky, then why don’t you come on do something about it? I haven’t kissed a girl in a few years. On TV.”

Ricky, 50, also poked fun at Justin Bieber’s recent paternity scandal – where a fan accused him of fathering her baby – saying: “Justin Bieber nearly had to take a paternity test. What a waste of a test that would have been.  No, he’s not the father. The only way that he could have impregnated a girl was if he borrowed one of Martha Stewart’s old turkey basters.”

Celebrity break-ups also came in for a bashing with Ricky focusing on Kim Kardashian’s 72-day marriage to Kris Humphries.

He said: “Arnold and Maria. J.Lo and Marc Anthony. Ashton and Demi. Kim Kardashian and some guy no one will ever remember.  He wasn’t around long. Seventy-two days – a marriage that lasted 72 days. I’ve sat through longer James Cameron speeches.”